TV on DVD: Interview with Shawn Ryan, Creator of 'The Shield' - Complete Series out on DVD Today 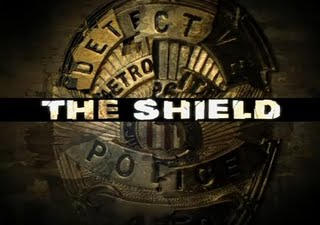 "The Shield: Complete Series" comes out on DVD today. Creator Shawn Ryan tells us all about it.
Today marks the release of "The Shield: Complete Series" on DVD. This series pushed the boundaries of what could be done on cable television, in terms of content, quality of writing and production, and talent (Academy Award winners galore guested or had long-running storylines). "The Shield" paved the way for current darlings of the critics and viewers like "Damages", "Mad Men", "Breaking Bad", Saving Grace", etc. High quality, aggressive and unapologetic storytelling is not limited to premium cable anymore because of "The Shield".

We had a chance to talk to Shawn Ryan, the creator of "The Shield" about these 88 episodes that ran from 2002 to 2008. We also found out about his other projects in addition to being showrunner for "Lie To Me" for FOX. Below are excerpts from our in-depth conversation, to hear more, listen to the entire interview in the player at the end of the post.

LAist: One of the great things about "The Shield" was that each as each episode ended, there didn't feel like there was closure - something else was always about to happend and there were going to be repercussions for what just happened. After the final episode aired (last November) it still feels like there still isn't closure, I think that for fans of the show, Vic Mackey is still out there and stuff is still going to go down.

Shawn Ryan: I think you bring up a decent point. I think that for some characters there is closure, like Shane, but you're right, I think the characters are alive and out there and I'm curious as to what is going on with them.

LAist: "The Shield" was such a pioneering show, what were your influences in creating this for basic cable?

Shawn Ryan: There weren't many high quality examples for us to use as role models in the basic cable world. I'd say that some of the HBO shows were more inspirational to me, like "Oz" and "The Sopranos" as well as movies. I'd say if there's one thing this show owes a debt to it's probably L.A. Confidential. There are some similarities between Vic Mackey and David Aceveda and Russell Crowe and Guy Pearce's characters in that in some ways - the brute and the politician. I was influenced by "Homicide: Life on the Street", enough so that I hired one of their actors to direct the pilot. But basically I just wanted a cop show that I was interested in watching.

LAist: What are we going to see on the complete DVD set?

Shawn Ryan: What people are going to see in the complete set vs. the season-by-season collections is that while the series was broadcast in 4:3 format it was actually shot in widescreen which is now available in the complete set and that's the biggest change. There's lots of featurettes and mini-documentaries and DVD commentaries on the vast majority of the episodes with commentary from all the writers, the director of photography, all the actors, the casting director, even an episode where the president of the network, John Landgraf, does a commentary on the show from his perspective. I really tried to get as many perspectives as possible on the show for this collection.

LAist: This show takes place in Los Angeles, do you think it shows a reality that a lot of people turn a blind eye to? For example, I heard an interview with Michael Chiklis where he describes going to an on-location shoot where they had to pay off gang members in order to proceed with the shoot.

Shawn Ryan: We didn't always film in the greatest of neighborhoods but that could happen in any city. But I would say that our show had a heightened reality, our storylines were big and then we would ground them in very realistic details. It was a combination of that: supercharged storylines but grounded with a look to the show that felt very visceral and real and that ended up appealing to so many people. To me that was the biggest difference because for years I was subjected to "The Wire" vs "The Shield" debates which I don't think is fair to either show. "The Wire" chose to do a very meticulous and studious look at crime and we were definitely more turbocharged and plot-driven.

LAist: Very different shows, not to mention a premium cable subscription-based network vs. the boundaries you had to break to do this on basic cable.

Shawn Ryan: The boundaries weren't really defined that well. We felt our way through and found out a way to define them. It was a cooperative process between me and my writers and the creative people at FX and the lawyers who were trying to determine what was appropriate to air and what could be aired and still have advertisers want to be involved in the show, which we needed in order to survive. But we found a balance so that I think the audience never felt we were selling out or dumbing down to appease the advertisers.

LAist: Currently you are showrunning "Lie To Me" on FOX and don't have something on FX (yet), we had read an article about FX vs. FOX - is there really a competition going on between these two spots on the dial?

Shawn Ryan: Oh yes, there is always competition between all these networks regardless if they are working under the same corporate umbrella. In fact, sometimes that makes it even more competitive because they are reporting to the same boss who is evaluating them side by side. But they have different agendas, different audiences to serve, and different business models so different shows are appropriate for different networks. I'm currently running "Lie To Me" on FOX but I had a pilot picked up by FX which we just started filming and it will be on in the Summer. It's called "Terriers" - so I'm back on FX, I'm back in that world, and I love working with those guys.

LAist: Can you tell us a bit more about "Terriers"?

Shawn Ryan: I'm producing it, it's written by Ted Griffin who wrote Oceans 11 and co-wrote Matchstick Men, and it stars Donal Logue and Michael Raymond James (from "True Blood") as two unlicensed off-the-beaten-track private detectives down in San Diego who live in this rundown beach community. In the pilot episode they find themselves in a deeper more dangerous mess than they are used to. The series will follow these guys as they try to figure out life and take on private detective cases - it's definitely very comedic which will distinguish it from "The Shield". The premiere date hasn't been announced but it will probably be in the 2nd or 3rd quarter of 2010.
---
---
Our interview also covered other notables from "The Shield": Kurt Sutter and his series "Sons of Anarchy", Kenny Johnson (aka "Lem"), and Shawn Ryan's take on what's happening on NBC: he's a huge fan of NBC's Thursday nights and has a lot of respect for Jay Leno but feels that there could be mid- to long-term damage being done to a network he grew up with and looked up to. To hear these details, listen to the full interview below.

"The Shield: Complete Series" is out today - now we need to set aside about 88 hours of our time to head back to the Farm, and we're looking forward to it.

Listen to the entire interview with Shawn Ryan here: