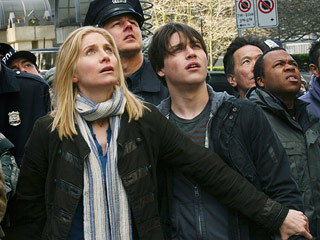 "V" starring Elizabeth Mitchell of "Lost" fame, premieres tonight at 8pm on ABC
Did you make the mistake, like us, of watching the original "V: The Final Battle" on Syfy last weekend? We can't believe that series was such a big deal when we were kids but here's good news, the remake of the series that airs tonight at 8pm on ABC takes the premise and completely owns it in a very slick and well done (at least for the part of the pilot that we've seen) rendition. We'll be watching and not remotely comparing.
—-
Turn it off, for your kids sake: according to Nielsen Media Research, kids are watching more TV now than they have in years, and these are hours spent directly in front of the television, not online or with other kinds of access. Kids 2-5 are spending 32 hours a week, on average, watching television. We know it's all over for us, the brains are fried and we don't have an original thought or desire left, but for effsake, that's way too many hours for a kid to spend in front of the TV.
—-
It's official, "Southland" will live on at TNT.
—-
While we might love "30 Rock" we realize that not everyone does and proof of that was verified as the program debuted on Sunday in Germany and literally no one tuned in. So, if you don't like "30 Rock", just move to Germany, also, the beer is excellent.
—-
The TV Junkie Plan: "V", "By he People: The Election of Barack Obama" (Produced by Edward Norton), Letterman (Former VP Al Gore guests), Fallon.

8:00pm 90210 The CW - Gia and Navid's investigation into student drug use leads them to Annie's boyfriend, Jasper; Naomi and Silver worry that Adrianna will relapse

9:00pm By the People: The Election of Barack Obama HBO - (2009) Illinois Senator Barack Obama campaigns to become the first black president of the United State

9:00pm NCIS: Los Angeles CBS - The team investigates when a wealthy bachelor falls to his death from a party on a roof.

10:00pm Sons of Anarchy FX - When SAMCRO's adult-film business becomes a hindrance to the club, Clay seizes the opportunity to revive the gun-running cartel