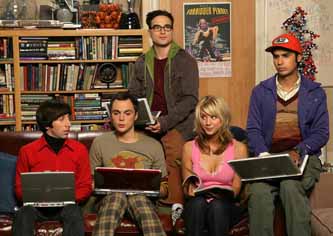 New "Big Bang Theory" on CBS at 9:30pm
There's already some news about how this season is going in terms of viewership for the big networks: all the big networks have larger audiences with the exception of ABC. NBC is still struggling in 4th place and its "Jay Leno Show" has about 1/2 the viewership of its rival networks at that hour. Leno did an interview over at Broadcasting & Cable to get some positive press and alludes to a desire to return to the 11:35pm slot.
—-
Didn't get enough Halloween? If not then check out IFC's web series "Dead & Lonely" which has five episodes that went live on Halloween night.
—-
The saga of who will sponsor Seth MacFarlane's "Family Guy Presents: Seth and Alex's Almost Live Comedy Show" seems to be coming to an end as Warner Brothers' Sherlock Holmes steps in to fill Microsoft's shoes as sole sponsor of the November 8th show.
—-
The TV Junkie hopes to be interviewing some of the cast of HBO's "Bored to Death" tonight - we'll post video when we get it!
—-
The TV Junkie Plan: "How I Met Your Mother", "The Big Bang Theory", "Cake Boss", Conan (great line up!), Ferguson.

8:00pm How I Met Your Mother CBS - Barney's know-it-all attitude gets him in hot water with Robin

8:00pm Heroes NBC - When Hiro travels three years into the past, he gets a second chance to save Charlie from Sylar

9:00pm Gossip Girl The CW - Olivia tries to keep Dan from finding out what she said during her appearance on Jimmy Fallon's talk show