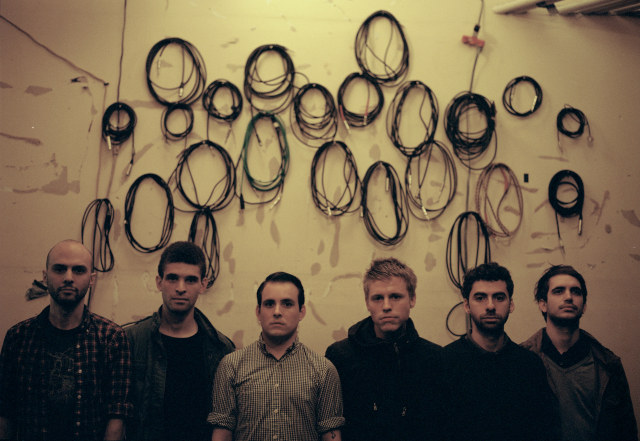 White Rabbits I Photo courtesy of Tell All Your Friends PR.

In honor of Halloween, Patterson seemed to want to scare the hell out of me. He picked up the phone with a, "Hi! I can't talk right now. I'm careening down this tiny mountain road at 80mph. Can I call you back in two minutes?" with the wind rushing over the airwaves and band mates' yelps of terror in the background. Naturally I hung up, and hoped he'd survive. If not, at least it would make a good story. "I was the last journalist to ever speak to Patterson alive," I would say at cocktail parties.

For those of you who don't know, White Rabbits isn't just a rock band from New York City. It's a band of six drummers from New York City. Watching their live show is like having each note pounded into your chest with a sledgehammer... in a good way. At any given time, three or more members are pummeling their instruments with an energy that is both mesmerizing and terrifying. It's impossible to attend a show without finding yourself clapping along, pounding on your chest, jumping up and down, and desperately restraining yourself from drumming on your neighbor's back. Fortunately he called back and we talked about his band spectacular new release It's Frightening, working with Britt Daniels (Spoons) as a producer, our mutual hatred of horror movies, and meeting Atlas Sound in customs.

When did you first pick up an instrument?
I was in fifth grade when I first started properly playing music. I always really wanted to, but the music program at my school didn't start until then. I played drums all through high school and college. I really took any opportunity to pick up some sticks and hit things.

I heard you all met at the University of Missouri? Did you have the same classes?
I had seen the guys around town at shows and stuff. I worked at a record store with Greg (Roberts) and we would listen to records at the store, and show each other new bands and stuff. He was in a band with a few of the other guys doing punkish sort of thing when I joined.

How long were you guys a punk band?
We continued on that path for like a month. Well, no it was sort of a gradual change over the course of a year. When we moved to New York there was kind of an overhaul. We scrapped all of our old songs and started over.

Why did you scrap all of your old stuff?
When we moved to New York we had a hard enough time getting things going. Finding new jobs and apartments and things, so it was really hard to write music. We all just hit a wall creatively. So I decided to stop playing drums and play the piano, even though I could barely play.

That's really gutsy just abandoning the instrument you know and picking up a new one. Why did you choose the piano?
I don't know why. I was really excited about learning how to play it. Matt was a great drummer, so I didn't feel bad about abandoning the drums. Also, he looks cool when he plays, which I don't. I just picked up the keyboard to fill the void.

You and Greg Roberts both share lead vocal duties. How do you decide who sings what?
It's kind of an unspoken kind of thing. There are melodies that are Greg melodies and ones that are Stephen melodies.

What does a Stephen melody sound like?
Um...(laughs) I hadn't really thought about that before. A Stephen melody isn't as pretty as a Greg melody. They call me when they just need someone to yell some shit over over the music.

Where did you get the name the White Rabbits?
There's no real story. It was just a name that we all didn't hate and it wasn't taken. We thought we were being original having an animal band, but apparently we're part of a trend.

Is your band a democracy or a dictatorship?
It's a democracy with little hints of dictatorship depending on who's idea were working on. But anything we've committed to tape is 100% supported by the six of us.

Were there any lessons you learned from making Fort Nightly that you applied to recording your second album, It's Frightening?
We learned we needed to work fast. We did the first one over the course of a year and we did it digitally, which was not a good combination for our sanity. We second guessed everything and kept putting more tracks on top of tracks on top of tracks. It was nuts. This last record feels a lot more live and raw then the first record. It's rowdy and wild but a little bit more paced than before. I think it's a better representation of who we are as a band.

Why is it called It's Frightening?
It was just an image in our heads when we worked with some songs. We thought it was funny.

Speaking of frightening, what scares you the most?
I hate horror movies. I had to get escorted out of every haunted house I went to as a kid. I would always break down and cry and they would have to turn on all the lights.

So do you hate Halloween?
Yeah, but we're going to be on the road for Halloween, so I think we're all going to stop and watch Paranormal Activity.

Are you crazy?
Yeah, I know I shouldn't do it. You'll see me on Monday as a broken shell of a man, all shivering and paranoid. (laughs)

That's just masochistic. What was "Percussion Gun" inspired by?
Nothing in particular, really. We were all obsessed with the Burundi beat at the time. We were all just interested in using that rhythm. It was really quick to write actually. 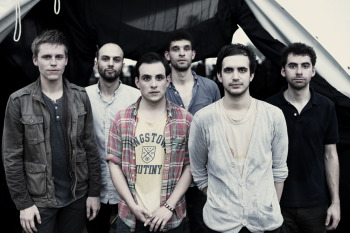 Photo courtesy of Tell All Your Friends PR.

Did you ever feel sick during that video when you're all spinning around?
Oh yeah, that shoot was completely nauseating. We were all horribly sick ten to fifteen minutes into that first hour.

How long did they spin you for?
Two days! We got used to it after awhile and stopped puking into buckets every ten minutes. We shot it in Columbia, Missouri with our friends who had gone our tour with us.

How did they get you to spin like that?
I probably shouldn't be telling you this, but we were being spun by three of our friends dressed in black. They just ran around the platform spinning us faster and faster. God there were so many mishaps with that video. The ring knocked over the gear or people fell off. We kept all of it on a gag reel for ourselves. It's pretty rad.

Is it weird seeing your song in a Ralph Lauren ad?
It was just bizarre. It didn't seem to work that well, either, but what do I know? You know, I haven't heard us on the radio, yet.

Really? I heard you on KROQ last night right after Nirvana.
Oh God. I better not listen to the radio in LA then. There's like an unspoken rule among bands that you don't put like the Beatles or Nirvana on your playlists before the show starts. They will just make you look and sound so bad. We want people to forget about these things.

How did you get Britt Daniels (Spoon) to produce your album? I know you guys went on tour with Spoon. Was it something you talked about on tour?
No, we didn't talk about it on tour at all. We just became really good friends. We bonded over similar music tastes and stuff like that. When we were putting together the next record we had a list of names we wanted to work with and it just took a phone call. We really wanted to work with a friend and a fellow musician. It was also his first time time producing a record, so that was pretty cool.

What was the worst show you ever played?
We ended one of our tours in DC and we just celebrated a little too hard beforehand. We also went on much later then we thought we all were. It was one sloppy, sloppy, drunken mess. (laughs) Sorry, DC. Hopefully, they've forgotten about it by now.

What is the weirdest thing you ever saw in the audience?
The weirdest/best thing I ever saw was in St. Louis, which is where I'm from. I saw my granny in the audience. It is such a weird and awesome thing having your grandmother watching you play rock 'n' roll in a smoky loud club.

Do you have any strange promoter stories?
Yeah! I have a really weird one from this last tour. We were in Northampton, MA and we had just checked into our hotel the night before our show and the promoter told us that it was canceled. They said that the venue was going out of business. So we were super bummed because we had paid two nights for the hotel, but we decided to turn it into a positive thing. We tried to figure out if we could hop on another bill or play somebody's basement or get some other gig somehow. So we went down to the local bar to ask around and I went up to these guys, and they turned out to be the promoters who canceled our show. I mean, what are the odds? The first person I talk to in Northampton turn out to be the promoters who had screwed us.

Did you give them a hard time?
Yeah, especially since it turned out that the club was still open, they just hadn't sold enough tickets. But they were able to find us another place to play and it ended up being really positive.

Do you have a favorite local band at the moment?
I really like the guys we're on tour with, Glass Ghost. They're really great.

Okay, last question. What's your favorite album this year?
I'm a big fan of Mos Def's record The Ecstatic. I think it's really great. I also really like The Atlas Sound's record. You know we actually do a cover of his song "Shelia." It was so weird, we met Bradford Cox once the Canadian border. We were both going through customs at the same time, and he had found out that we were doing a cover of his song.

Was he down with it?
Oh yeah, he was honored. He was a super nice guy. It was really cool.

Well thank you for talking with us.
Thank you!

Be sure to catch White Rabbits tonight at the El Rey Theatre with Local Natives and Glass Ghost. Doors are at 8pm. Tickets are $17.