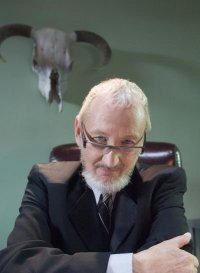 Robert Englund is Dr. Andover in "Fear Clinic" on FEARnet.com
Robert Englund has been involved in film and television for 35 years, other than his most famous creation, Freddy Krueger, he's been in television staples such as "Soap", "CHiPs", and "V" as well as movies like The Phantom of the Opera, Strangeland, and 2001 Maniacs. He's also been a director and is now an author with the release of his autobiography Hollywood Monster: A Walk Down Elm Street With the Man of Your Dreams, which tells the stories of his life in the business so far with anecdotes about everyone from Burt Reynolds to Johnny Depp. We talked with Englund about his book as well as his new web series, "Fear Clinic", which is available on FEARnet - with five new episodes this week, including one featuring teen heartthrob Lucas Till. Englund plays the notorious Dr. Andover who specializes in treating phobias with cures that might be worse than the ailment.

We spoke with Robert Englund in New York via phone on October 29th.

LAist: Can I wish you a Happy Halloween?

Robert Englund: This is my favorite time of year Tom, you know that, trick or treat buddy!

LAist: The 13 year old Fangoria reader in me is very excited to be talking with you!

Robert Englund: Ah, well I talk in my book about the 14 year old that Wes Craven has kept alive inside himself and the 14 year old Mark Hamill that wrote letters to the editor of Famous Monsters magazine, so I understand. Fangoria has been very good to me and I plan to take all the covers that I've been on and put them in a plexiglass frame.

Robert Englund: This began with a wonderful feature film script called "Fear Chamber" that came across my desk and something about it really struck me. I loved the idea that we could do with the phobias what we did with the dreams in Nightmare on Elm Street but it was still a very distinctly different project and not at all derivative. I expressed interest with the Andover character who is this obsessive semi-genius psychologist who has a controversial technique for treating debilitating phobia disorders. He's obviously made some mistake or harmed someone in the United States and lost his medical license so he's moved his clinic south of the border but he's very much in demand because his technique actuallys works, he's a doctor of last resort for people with really bad disorders. His clinic is this seedy Girl Interrupted meets One Flew Over the Cuckoo's Nest with a little Altered States thrown in.

One of my patients, played by Danielle Harris of Halloween movies fame, I can't seem to cure, and I'm obsessed about that and have thrown her in a cell in the clinic but she's stolen a Blackberry and is broadcasting updates from the clinic to the web.

LAist: How many episodes are done?

Robert Englund: We have five in the can, we've got fifteen scripts and we're waiting for the green light on the next fifteen. We shoot five at a time, and we lock ourselves in this old abandoned hospital in Boyle Heights and we go to tapas bars at night and drink a lot of wine and hope that Los Lobos is playing. We get five done and then we need a breather. We've got this incredible guy, Robert Hall with his studio Almost Human, who was doing all the effects for "Terminator: The Sarah Connor Chronicles". We had to figure out how to truncate the story in order to tell the story eight minutes at a time but I think we've solved that and have raised the bar for entertainment online. We really wanted to make some slick stuff especially if it was going to be in the horror genre. Down the line we may need to bring this to cable but we really want to get this around online.

LAist: How do you feel about the relaunch of "V" next week?

Robert Englund: I'm feeling a little old because right now is the twenty-fifth anniversary of Nightmare on Elm Street, the twenty-fifth anniversary of "V", and they're remaking both of them so it gives you some perspective on your career. I wrote my biography to remind the audience that there was life before Freddy and there's been a lot of life after Freddy and to talk about the people I met on the way up and on the way down like Johnny Depp and Patricia Arquette, Lawrence Fishburne. It was a lot of fun doing it, I started it as an homage, a Valentine to my horror fans, but I realized that it had to be more of a Hollywood memoir because I'd really been around for a while. In the last twenty-five years of the 20th century I was one of the working actors of Hollywood who got to work with everyone.... and I wanted to share all my stories, whether it was Richard Gere breaking my nose or Paul Walker sleeping in his car when he did his first Disney movie. I just wanted to let everybody know that your dreams can come true. It might not be the exact dream you had, you may be behind the camera or doing music or something but if you stick it out, you can be amazed at what can happen.

Robert Englund: Yeah, it is... there's an accumulation that happens when you work with a lot of wonderful people. What a lot of civilians and even critics don't realize is that we actors are huge fans too, just like everybody else. When you look back on thirty-five years it accumulates, there's a sensibility and a hindsight, a survey of survivors and people who paid their dues, people you knew who were going to be stars, and golden boys who are missing in action now, and old Hollywood stars, people who've passed away, and the kids who are just starting out in their careers and I hope the book imparts some of that to the readers.
---

You can get more information on Robert Englund at his website, his autobiography is available off of his website (signed copies!) as well as Amazon, and you can check out the first five episodes of "Fear Clinic" on FEARnet which is home to horror films, shows, and news about the genre.