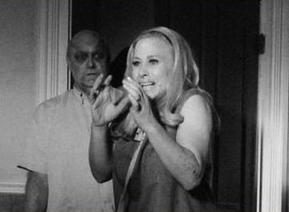 You will have plenty of Halloween options starting tonight with CBS covering all bases with "NUMB3RS", "Medium" and "Ghost Whisperer" (fans of the last two should check out this "Spirit of Friday Night" website) but don't forget oldies but goodies like Psycho on TCM at 9pm. Tomorrow there will be Halloween fare all over the place with scary movies on IFC, TCM, and AMC which will be running Night of the Living Dead back to back from 6pm until midnight. You can always check out Martha Stewart's TV options or consider one of these "True Blood" jack-o-lantern stencils for last-minute Halloween ideas.

Sunday you can recover from your efforts with a marathon running of the original "V" series on Syfy starting at Noon - do this in preparation for the launch of the remade series launching on ABC this Tuesday at 8pm which looks pretty damn good. Then settle in for an evening that should begin with an excellent episode of "Nature" on the births of many interesting animals before moving on to the difficult choice on the premium channels at 9pm: serial killer "Dexter" on Showtime or comedy hour on HBO with "Curb Your Enthusiasm" and "Bored to Death"? We're going with comedy. Be sure to check out our full listings!
—-
"American Dad" has been picked up for a 6th season thus ensuring that FOX's animation-Sunday stays fully animated. Not sure if that's such a good idea but if you are a fan, let us know, is this show any better than "The Cleveland Show"? If you had to pick between the 3 Seth MacFarlane shows, would "American Dad" be the one?
—-
If you're interested in the status of a favorite show (on the big networks), you should check out The Hollywood Reporter's Live Feed Live Feed's TV Series Survival Status Chart. We use it regularly as a reality check along with with Tim Goodman's (of the SF Chronicle) Power Rankings.
—-
The TV Junkie Plan: Tonight - "Stargate Universe", "The Soup", "The Prisoner", Letterman, Fallon. Saturday - The Body Snatcher. Sunday - "V" Miniseries Marathon, "Nature", "Curb Your Enthusiasm", "Bored to Death", "Mad Men".

9:00pm Monk USA - Monk reluctantly adopts a dog while looking into the disappearance of its owner.

9:00pm Stargate Universe Syfy - The team must locate a new water source before the ship's water reserves are depleted.

9-11:00pm The Prisoner IFC - More episodes of the classic series from Patrick McGoohan

10:00pm NUMB3RS CBS - The body of a dead woman turns up at a decommissioned air base where spooky things have been happening.

8:00pm Top 20 Most Shocking truTV - "Escapes from Death" including tornados, hit and run, and an ambulance crash

10:00pm Robin Hood BBC America - Isabella is desperate to prove her loyalty to the Prince and win the Sheriff's job

12:30pm "V" Miniseries Marathon Syfy - The 1983 classic is aired in its entirety in preparation for the relaunch of the series this week.

8:00pm The Amazing Race 15 CBS - One team reveals a personal secret to the others

9:00pm Dexter Showtime - Dexter works to stay ahead of the Trinity investigation; an unexpected source offers advice on the friction between Rita and Dexter.

Drunk Ewoks pound vodka and hump legs on the "Today" show this morning: