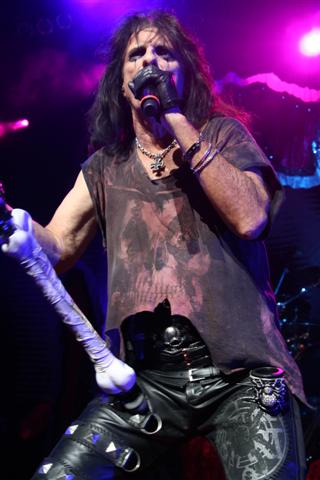 Last night Alice Cooper drove the Nokia crowd into a hysterical heavy metal sing-along on his Theatre of Death tour. It is just impossible not to sing along with "I'm Eighteen". But besides his musical ouvre, there are a few things that set Alice Cooper apart and give him such a rabid following.

First and foremost, Alice is a showman. I mean besides being a singer. He gets decapitated, dragged all over the stage and abused by psycho Nurse Rosetta, impaled by a 6-foot long hypodermic, and hanged (a stunt that proved nearly fatal in England in the 80s).

On this tour there were a few new tricks I hadn't seen before, like Nurse Rosetta emitting a shower of sparks from her crotch as she attempts to use a circular saw to remove a chastity belt. And towards the end of the show, Alice is locked in a box as the once-again evil Nurse Rosetta drives a board laden with swords through Alice.

You could probably write a very long article on the character of Nurse Rosetta alone, as she plays all of the female parts in Alice's vignettes. She is alternately an object of lust and fear, dying and resurrecting more than once. But we will leave that to Alice's psychiatrist.

Another interesting twist this time around was that all of the stagehands were dressed like ninjas. When they were through fixing the wah-wah pedal, Alice would attack them and chase them from the stage. Sometimes ninjas would launch surprise attacks from behind. But they were no match for him. He's Alice Cooper, damnit!

Slash joined Alice onstage for the grand finale, but he too was no match for the great one, whose silver sparkly suit outshone the brightest of guest stars.

The other thing that impresses me about Alice Cooper is that he truly understands the psychology of fandom. He knows that people want a piece of him. Literally. A touch, a memento. Years and years ago, he first started out tossing out his dancing cane. At one concert he looked me in the eye and leaned down and tossed the cane directly to me. To me! A big dickwad with a crew cut wrestled it out of my deserving hands. If you're somewhere out there, jarhead asshole, I'm still mad!

Anyways, then Alice developed Billion Dollar Babies money which was ingenious, You could print up uhh, billions of them cheap. Everyone could have them. The only limitation was that money only flies so far. maybe the tenth row. And yes, I have one glued in a diary somewhere.

This year Alice paired his mementos with "Dirty Diamonds" and used what New Orleans has long known to be the perfect object to throw - glittery beads! He made it halfway to the back of the stadium with some of them. There was also kind of a Flaming Lips moment when confetti fell and giant balloons danced around. It's not all necrophilia, asylums and murder.

But even if you can't get a tangible memento, Alice spends the entire concert pacing the stage, so no matter where you are sitting, you get a fantastic view for part of the concert. He also pauses and sings a line or two of the song to individual concertgoers. He looks you right in the eye and gives you a moment. A personal serenade. The first time he did it to me, it was so magical, I was pointing to myself, bragging in elation, "I even make my grandma sick! Alice Cooper said I make my grandma sick!!!"

It was super exciting to get a photo pass last night for the Nokia. We had very strict rules to stay in the aisles, and I was not going to mess this up. I stood obediently in the aisle, and then the security guard, said, "Ma'am, you're gonna have to come up to the stage."

"We can't have you all blocking the aisles. Now make room. More photographers are coming."

So there I was, touching the stage, blocked only by the monitor. Sigh. And we had four songs instead of the usual three. Alice started off the madness with "School's Out". But something was wrong. My camera wouldn't work. I got hysterical. It was my worst nightmare. Then I realized it had clicked on "timer". Whew. I was just too nervous.

Alice had everyone screaming for "I'm Eighteen". He put a foot up on the monitor to shout back at the throng, and I had the perfect heavy metal crotch shot. Every photographer's dream. he often does costume changes right on stage, with evil and mysterious figures, usually mental hospital workers wrapping him in a straight jacket. And that is exactly what he did next, struggling in a straight jacket For for the fourth song, "The Ballad of Dwight Fry", a very pretty ballad about a father missing his daughter while being institutionalized.

The next thing you know, the executioners are grabbing him and wheeling out the guillotine! Woohoo! That must be why we got four songs. So we could photograph the guillotine. They put him in position, and I'm clicking away, waiting for the blade to fall, and I feel that familiar "tap tap tap" on my shoulder. Time for the photographers to leave.

But the music was still playing. The song wasn't over! The song isn't over until his head gets chopped off! I have waited practically my whole life and concert after concert to finally photograph Alice Cooper's head getting chopped off. "Tap tap tap" At this point, they would have had to drag me out by my feet. Every synapse in my brain was focused on that blade. Finally it fell. CHOP! And I walked out happily.

The people in charge of us - the photog wranglers- were not very happy. I apologized, but I mean, it was still the fourth song. Later Bobzilla said he thought they may have played "Wicked Young Man" inbetween songs. Whoops. I apologize, Nokia. I counted wrong. I was hypnotized. When I am so close to Alice Cooper's crotch I cannot be expected to do math.

Some of you may be noticing that I am just a little obsessed with Alice Cooper. When I was a little girl my brother had a poster of a man hung from a noose on the ceiling over his bed. Big families get jostled around when company comes, so I often ended up sleeping in his hippie room (I guess my mom didn't want Auntie Loretta to find the rolling papers). As a little girl between the ages of four and seven years old, that poster of the hanged man scared the crap out of me. He was my boogey man and I saw him in my nightmares for many years.

When I scored a copy of the "Killer" album intact as a teenager, I realized that the poster was Alice Cooper's calendar. I guess you never get over your first boogey man.

Stay tuned for Bobzilla's music review and many more photos.

Photo by Elise Thompson for LAist