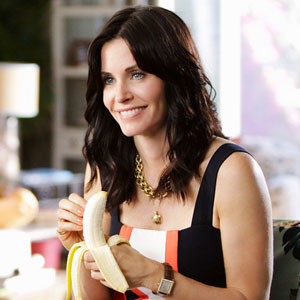 "Cougar Town" is on at 9:30pm on ABC, thanks for this pic, Courteney
There was some great TV on last night, with "Sons of Anarchy" continuing to get back on track after some silliness a couple weeks ago. On the more depressing side of things, "Frontline" continued to remind us that we are still riding a unicycle on the precipice of economic disaster. Look forward to more stark details from PBS as Margaret Warner, correspondent for "The NewsHour with Jim Lehrer", is traveling in Pakistan with Secretary of State Hilary Clinton and will be reporting on the region tonight and all this week.

At least late night TV brought us out of our funk: just 24 hours after Craig Ferguson had to finish his taping by flashlight due to high winds knocking out power in his studio, he started off the show with a hilarious and very silly rendition of the Village People's "In the Navy" which is what late night is all about. Flipping channels over to Fallon, a surprise visit by Susan Sarandon seemed to knock even Artie Lange askew.

Did you have any favorite TV moments last night?
—-
The Lakers' Pau Gasol will be dusting off his acting chops (again?) for an episode of "CSI: Miami". We think he should have held off for a role on "NCIS: Los Angeles".
—-
Oh, that thing called The World Series starts tonight, in case you are interested.
—-
The TV Junkie Plan: "The Botany of Desire", "Modern Family", "Cougar Town", "Nip/Tuck", Letterman, Fallon.

8:00pm America's Next Top Model The CW - Tyra sends the models to Hawaii for the rest of the competition; the models get surfing lessons from Buzzy Kerbox

9:00pm Modern Family ABC - Jay and Gloria have a disagreement about Manny's choice of outfit for his first day back at school

9:30pm Cougar Town ABC - Jules decides to break things off with Josh when he tells her he loves her

10:00pm South Park Comedy Central - Stan's trip to the Denver Aquarium is ruined when the Japanese begin killing all of the world's dolphins and whales.

10:30pm Secret Girlfriend Comedy Central - Jessica poses as a cousin to keep Mandy from getting jealous.

10:30pm Eaten Alive IFC - (1977) A Louisiana hotel owner (Neville Brand) either feeds guests to his alligator or gets them with a scythe.