Woody Harrelson's 'The Messenger' to Premiere at AFI Festival

Post-screening panel of "The Messenger" with Woody Harrelson and Director Oren Moverman from Thomas Attila Lewis on Vimeo.

The AFI Film Festival starts this Friday and while there are many excellent films to choose from, we highly recommend The Messenger which has its Los Angeles premiere at the festival.

The film stars Woody Harrelson and Ben Foster as U.S. Army officers assigned to the Army's Casualty Notification service whose duty is to deliver notification of death to the next-of-kin of fallen soldiers.

We went to the New York City premiere of the film at the CMJ Film Festival and shot the video of Woody Harrelson and the film's director, Oren Moverman, answering questions from the audience about the film and their preparation for it. This is a powerful and moving film that had us holding onto the armrests with anxiety every time these two soldiers walked up to a doorway to deliver the worst news anyone could ever receive.

To achieve some of the realism, the actual rehearsals were shot which meant that the actors hadn't walked through the action before: there were no blocking marks, they didn't know how and where to sit down in a scene, or who was going to be standing behind who, etc. - the result of which was a gripping awkwardness that is as close to reality as we would ever want to get but was totally addicting as well. One audience member told the panel that they found themselves wanting more "notification scenes" as if they were suffering from withdrawals.

Is there a political slant to this film? Yes and no. In speaking with Director Oren Moverman after the panel, he told us that while the film was shot during the previous administration, it is still at least as relevant today and that it should prompt the following questions and more: Should more people know about who has died in combat? Should there be more of an impact from these deaths? What is happening to the soldiers who are coming home, wounded or not? Is it ok that the tiny part of our population that serves exclusively bear the grief of casualties?

In many ways, The Messenger is like many other films about soldiers coming home from war (The Men starring Marlon Brando, The Deerhunter starring Robert De Niro and Christopher Walken, etc.) but this is a film about a conflict that is still going on, where servicemen and women are dying on a regular basis, with casualty notification officers on missions in our county almost every single day.

Very interestingly, The Messenger is the movie that Woody Harrelson is throwing himself behind, not Zombieland nor 2012. In the next few weeks you're going to hear Woody on "Fresh Air" with Terry Gross, and see him on "The Colbert Report" along with many other outlets and venues, talking about this movie because it's a movie about what's happening right now to real people, and that's a bit more important than the Hollywood machine.

The Messenger screens next Tuesday, November 3rd, at 10pm at Mann's Chinese Theater. 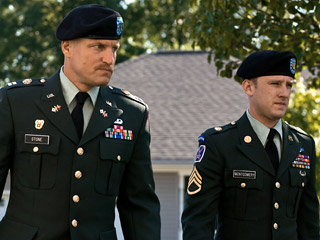 "The Messenger", starring Woody Harrelson and Ben Foster, has its LA premiere at the AFI Film Festival on Tuesday, November 3rd.