TV Junkie: Dance, Dance, So What? Clooney Show on TNT 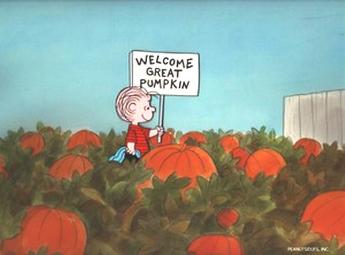 "It's The Great Pumpkin, Charlie Brown" is on ABC at 8pm tonight
It's dance night again and we're asking you if you care. We want to hear from the lovers and the haters: should we keep listing new episodes of "So You Think You Can Dance" and "Dancing With The Stars" in our schedule or can we save that space for something else? 2 contestants from each show will be eliminated tonight BTW.
—-
TNT is again stepping up to the plate by funding a pilot to be executive produced by George Clooney. The show, titled (for now) "Delta Blues", is about a Memphis cop who moonlights as an Elvis impersonator and lives with his mother.
—-
Halloween programming additions:You like "Mad Men"? Check out the "Mad Men Halloween Guide" for costume an party ideas. "Parks and Recreation" on NBC on Thursday at 8:30pm - Ann (Rashida Jones) struggles to make her Halloween party fun, and gets help from an unlikely source, perhaps the "Mad Men Halloween Guide"?. "The Office" at 9:00pm on NBC on Thursday - the office plans a “Haunted House” for the children in the community. And TONIGHT on ABC we've got "It's the Great Pumpkin, Charlie Brown" at 8pm, probably with waaay too many commercials.
—-
The TV Junkie Plan: "It's the Great Pumpkin, Charlie Brown", "Frontline", "Sons of Anarchy", Conan, Ferguson.

8:00pm It's the Great Pumpkin, Charlie Brown ABC - Linus waits in the pumpkin patch for the elusive Halloween symbol to appear

8:00pm So You Think You Can Dance FOX - 2 dancers eliminated

9:00pm Frontline PBS/KCET - Middle-class Americans who are coping with economic uncertainty include a small-business owner and a woman who fears she will lose her health benefits

9:00pm Dirty Jobs Discovery - Mike travels to a California farm where he learns to care for dromedary camels

10:00pm Sons of Anarchy FX - SAMCRO takes extreme measures to procure weapons for a customer; revenge is sought following a theft at Caracara Studios that puts one diva at risk