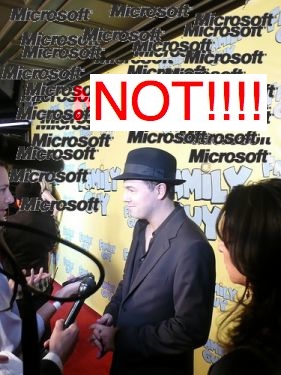 Microsoft has now pulled its sponsorship of Seth MacFarlane's November "Family Guy" special
A couple weeks ago we wrote about Microsoft's insidious sponsorship of Seth MacFarlane's November special, Family Guy Presents: Seth and Alex's Almost Live Comedy Show" on November 8th and it now appears that Microsoft can't handle MacFarlane's humor and has dropped the sponsorship. After Microsoft execs attended the October 16th taping, a Microsoft spokesperson stated "We initially chose to participate in the Seth and Alex variety show based on the audience composition and creative humor of 'Family Guy,' but after reviewing an early version of the variety show it became clear that the content was not a fit with the Windows brand." In a twist of reality the company is now behaving exactly like the John Hodgeman parody character.

Oh, but it was no problem to throw tens of millions of dollars at Jerry Seinfeld? Jerry never seemed like a Windows guy to us and confirmed that in last night's episode of "Curb Your Enthusiasm" as he sat in front of a Mac for several shots. Last night's episode was excellent as was "Bored to Death", BTW.

---
The Halloween spirit is upon us with plenty of programming this week: as usual, TCM and IFC will have ongoing Halloween movies, but tonight will feature a Halloween-themed episode of "Heroes" on NBC; every episode of "Martha Stewart Living" this week will feature Halloween tips and guests like Jimmy Fallon and "Mad Men"'s Christina Hendricks as well as a special at 11pm on Halloween night; the Fine Living Network will have a "Haunted Homes" marathon from Noon until 5pm on Halloween as well; and then you've got online and on demand properties like FEARnet with it's lists of movies, trivia and programming like "Fear Clinic" with interviews with the likes of Lucas Till and Robert Englund.

Are there some Halloween program tidbits you'd like to share with us?
---
"The Colbert Report" has launched "The Word" iPhone app and it's $0.99
---
It's never too late: TV Land is going to start running original programming with at least 2 sitcoms in the works. The network will be forgoing the 18-49 demographic and are instead targeting the 40-54s with the new shows: “Hot in Cleveland” and “Retired at 35.”
---
A couple items from The Hollywood Reporter: 1. You a "Deadliest Catch" fan? That Discovery show along with "Man vs. Wild" are being made into video games for pretty much all the platforms with the fishing one being available next Spring. 2. "Southland" might be moving to TNT, but it ain't a done deal.
---
Check out Fallon tonight! Willem Dafoe, actress Tiffani Thiessen who we interviewed on Friday, and the incredible Har Mar Superstar performs!

9:00pm Trauma NBC - A Halloween party turns into chaos; Glenn and Nancy's shift takes a bizarre turn; a secret is exposed that could change a partnership.

9:00pm Lie to Me FOX - A person from Lightman's past pulls him into a dangerous criminal conspiracy