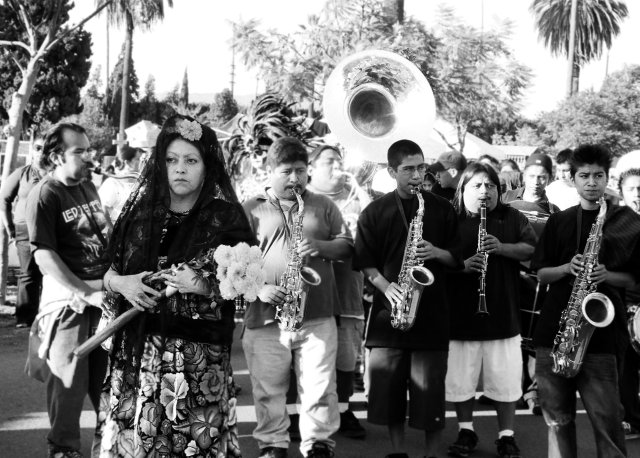 Photo by Paul Vargas/Used with permission

Today Hollywood Forever Cemetery will hold its 10th annual celebration of Dia de los Muertos from 4pm to 11pm. Dia de los Muertos is an ancient Aztec tradition. On Dia de los Muertos it is believed that the veil that separates the living from the dead is lifted, allowing visits from departed loved ones. It is a celebration, not a day of mourning. Altars are erected with images of the dead, their favorite foods, marigolds, calaveras and paper cut-outs to welcome the dead back home.

The one-day festival at Hollywood Cemetery was first conceived by Tyler Cassity and Deisy Marquez as a place in which this ancient tradition could be genuinely observed, celebrated and preserved. The event at the little cemetery on Santa Monica Boulevard is sponsored this year by el Jimador tequila, who will be offering signature cocktails. Traditional foods will be available. The celebration will include the traditional altars and arts and crafts as well as entertainment.

Highlights of the event include the premiere of La Fiesta Eterna, a documentary by filmmaker Christopher Cabrales, which narrates the tradition of the Dia de los Muertos in Mexico; a traditional Oaxacan burial; and live musical entertainment by Lila Downs, La Santa Cecilia and Las Cafeteras. Additionally, more than 150 altars will be exhibited by their creators for a chance to win cash prizes up to $3,000.

For the last 10 years, the Día de los Muertos festival has provided a dramatic venue to showcase a variety of Mexican folk music and art"; said Deisy Marquez from Hollywood Forever Cemetery. In 2008, approximately 20,000 attended the festivities and we expect to welcome even more this year, further entrenching us as the nation’s largest and most authentic Day of the Dead celebration.” $10 each. Gates will open from 4 p.m. to 11 p.m. Lila Downs’ performance is scheduled to begin at 9 p.m. for information call (323) 447-0999.