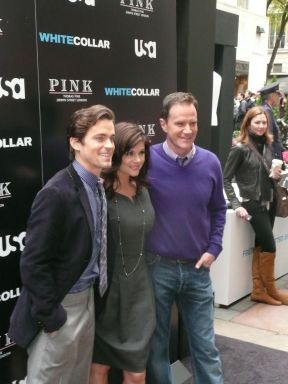 The prediction that TV was fading into the fog of yesteryear as a medium seems to not be true (for the moment). Overall viewership of TV is up by 4% and the departure of the coveted 18-49 demographic seems to have been arrested. The Hollywood Reporter offers a breakdown, network by network.
—-
On Wednesday we discussed FX's drama offerings and today Variety has a long piece on how FX is competing directly with its parent, FOX, in this category.
—-
Let's hope that the Angels disrupt programming for a few more days at least! In the meantime we have a lot of choices tonight but definitely check out "White Collar" (after watching our interviews from earlier this morning). Tonight also marks the final segment of IFC's excellent Monty Python documentary - a very worthy 6 hours of TV it was. Saturday looks bleak and Sunday has its usual too-much good stuff, too-little-time traffic jam. Have a great weekend! As usual, we appreciate your comments and please check out the full listings.

9:00pm Stargate Universe Syfy - The plan to abandon ship raises spirits until the crew discovers there is not room for everyone in the shuttle.

10:00pm NUMB3RS CBS - The team searches for the daughter of a geneticist; a dark secret is revealed.

9:00pm Robin Hood BBC America - When Prince John blocks all the local wells during a heat wave the outlaws are forced to take desperate measures to save thousands of villagers.

9:00pm MythBusters: Knock Your Socks Off Discovery - Adam and Jamie test the physics theory of bullet dropped vs. bullet fired; Kari, Grant and Tory test if it's possible to knock someone's socks off with a punch.

8:00pm The Amazing Race 15 Discovery - During a detour, the teams begin to feel delirious when temperatures top 130 degrees

9:30pm Bored to Death HBO - A married man hires Jonathan to retrieve a sex tape from a female escort.

10:00pm Mad Men AMC - A former client returns; Betty goes on a trip with the kids; Joan and Greg plan for their future.

10:00pm The Girls Next Door E! - Crystal, Karissa and Kristina cause a scene on a Hollywood tour bus

10:00pm Californication Showtime - Hank spends a bachelor weekend with an old buddy and shows him a good time