Interview with YACHT at the Brooklyn Bowl on 10/22/2009 from Thomas Attila Lewis on Vimeo.

The tribal performance art that is YACHT will be coming to LA tonight! We had the chance to speak to Claire Evans and Jona Bechtolt, the duo that power YACHT, at a party their label, DFA, was throwing at/against the 2009 CMJ festival in New York.

We talked about inspirations behind their new album, See Mystery Lights, which is their first release on DFA. Primary among their inspirations are the bizarre and strange Marfa lights of Western Texas, which they themselves witnessed on multiple occasions.

Their show tonight at Temporary Spaces Two is the last chance to see them in the US for quite a while as they will be touring extensively all over the world before returning our way any time soon. 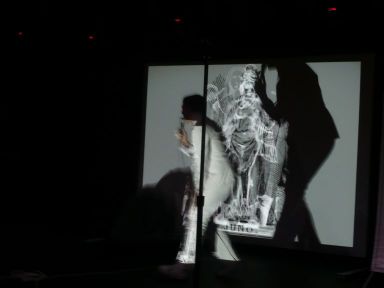