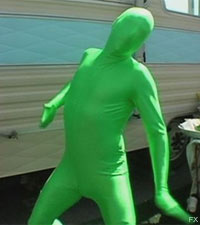 Greenman makes an appearance on tonight's "It's Always Sunny In Philadelphia" on FX at 10pm
NBC now says that Hulu will have to start increasing the number of ads in its player or offer subscription-based content. Good thing that NBC doesn't have exclusive control over Hulu.
—-
Another episode of "FlashForward" airs tonight but the show might change in the remainder of the season as co-showrunner and executive producer Marc Guggenheim will leave the series leaving co-creator/exec producer David Goyer, who has had limited hands-on experience, exclusively in charge. Maybe that will make the show remain fresh?
—-
FOX has pulled "Dollhouse" completely from its November schedule. The series returns in December in a deathrow Friday slot. If this is truly the end of the show, it won't be the end of the line for Eliza Dushku, whose appearance in Hulu commercials has made her a very recognizable face - we hope to see her again soon.

8:00pm Survivor: Samoa CBS - Both tribes are forced to be creative in finding ways to weather the elements

8:00pm SoCal Connected: The Young & Uninsured PBS/KCET - Over 1/3 of the uninsured are young adults 19-29. A full exploration of reasons why and how.

8:30pm Parks and Recreation NBC - Leslie and the rest of the department help an organization build a playground

9:00pm FlashForward ABC - Mark finds himself on the defense during a Senate Intelligence Committee hearing

9:00pm The Office NBC - Michael shocks Pam and Jim when he reveals the identity of his new girlfriend

9:00pm American Chopper TLC - Life at OCC changes now that Jr. and Mikey have been squeezed out of the business

9:30pm 30 Rock NBC - Jack tries to protect his job and the company when Devin returns to seek revenge

10:00pm It's Always Sunny in Philadelphia FX - The gang describes the trials and tribulations they went through, during game five of the World Series, in hopes the judge will clear them of all the citations they received.