TV Junkie: Buscemi To Do More TV; FX Scoring With 'Sons...' and 'Nip/Tuck' 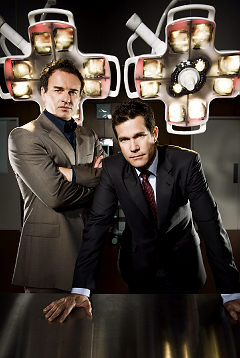 "Nip/Tuck" on FX at 10pm
Steve Buscemi and Stanley Tucci are teaming up for a couple TV projects: they're working on a drama for HBO which will star Tucci as a brilliant, one-time powerful politician struggling to rebuild his career and for TBS, an animated series called "Good and Evel" created "Daria" co-creator and "The Colbert Report" writer Glenn Eichler - the series will be voiced by both Tucci and Buscemi. No broadcast dates are set yet.
—-
Has anyone been watching "Sons of Anarchy" and "Nip/Tuck" on FX? The motorcycle gang drama (see our interview with series creator Kurt Sutter and series star Katey Sagal) seemed to get back on track last night after last week's somewhat scatter-brained and ridiculous plot turns (gang members riding around as back up for the deputy police chief? Randomly shooting up cars without repercussions? etc.). Tonight we have another round of the pseudo-pornographic "Nip/Tuck" which can range from being a pointed indictment of our superficial culture to being an overwrought train wreck of excess. We admit to being a rubbernecker that just can't not watch it. At least FX is presenting some non-pedestrian series and it appears that it's getting viewership as a reward with these programs earning impressive ratings for scripted programming.

7:00pm Attack of the Show G4 - Co-hosted by Eva Amurri from “Californication”!

8:00pm So You Think You Can Dance FOX - The dancers compete in the third and final part of the Las Vegas round.

9:00pm Modern Family ABC - Tensions rise during a day of barbecue and football at Jay and Gloria's in the wake of an incident between Manny and Luke at school.

9:00pm Glee FOX - Will composes a mash-up for a special occasion; McKinley High's cool kids are overthrown; Sue reveals her softer side.

9:00pm MythBusters Discovery - Adam and Jamie test whether a dirty car gets better gas mileage than a clean one

9:30pm Cougar Town ABC - Jules tries to boost Bobby's self-confidence; Laurie takes on a new client in an attempt to prove her worth to Jules.

10:00pm Vanguard Current - The power of oppression and fear of dissent in Cuba

10:00pm South Park Comedy Central - The boys sign up for the school wrestling club in an effort to become professional wrestlers.