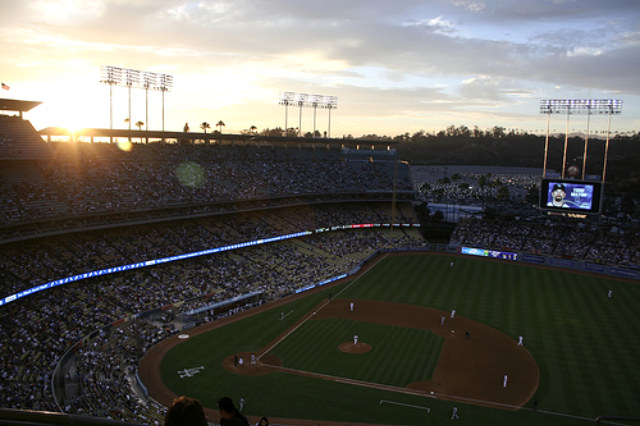 Dodger Stadium, as it was meant to be, sans lasers, graphs and beams of unnatural light. Photo by Scani - Salina Canizales via LAist Featured Photos Pool on Flickr

It's hard work watching baseball games on Fox. On the one hand, each contest always seems lasts an hour too long and, on the other, the Fox announcers over-the-top Yankee gushing (though mostly Derek Jeter) makes you feel less like you're watching a baseball game and more like an episode of the Dating Game.

Plus, last night's classic not withstanding, game one of the ALCS was a slow, matter of fact contest between the dominant Yankees and the suddenly hapless Angels. Maybe Fox had this in mind when they unveiled their latest offering to the gods of ADD-addled sports fans: FoxTrax+.

This newest addition to our television screen popped across the top left section of the screen near the start of the game. The two-leveled icon, which replaced the score box when it appeared, displayed the speed at which the ball left the pitcher's hand and the speed it arrived at home plate. Yeah, I don't get the point either and neither did the announcers.

(As if to prove the point that Fox wants to date the Yankees like they are contestant number one, FoxTrax dominantly informed you of the Yankee's pitches; all but one Angels pitcher escaped Fox scrutiny.)

The terrible Joe Buck offered no explanation and his play-by-play booth mate, the equally terrible Tim McCarver, gushed about how interesting the new contraption was without telling us what it actually brought to the table. (For more how bad Joe Buck, see my 2007 piece,"Joe Buck is Ruining the Playoffs.")

“We have a machine, it's called FoxTrax Plus, that we are introducing tonight and it has shown us that the miles per hour relates to the ball out of the pitcher's hand. So right there, the release of the fastball by [Yankee pitcher A.J.] Burnett to Morales [though he means Yankees catcher Benjie Molina] was 93 miles-an-hour coming out of his hand and when it arrived at home plate, it was 86 miles-an-hour. I did not realize that and I'm sure a lot of you folks out there may not have realized it.”

That's it. I guess we are left to surmise the point of this new contraption and what it can tell us about a) The pitcher, b) The pitch and c) Why Fox continues to develop new ideas that are ridiculously pointless.

Working in reverse order, let's take a stroll down memory lane and consider other attempts by Fox to make our sports viewing easier and more entertaining.

Years ago,when they showed hockey on national television, Fox listened to the complaints from what had to be non-hockey fans they they just couldn't, for the life of them, follow that little black puck darting across their screen. Where did that dag nabit thing go? Is it in the net? Did that guy with that, what do you call it, hockey stick, hit it somewhere?

Fox answered their concerns by affixing a laser beam (also called FoxTrax) behind the puck like a trail of comet dust through the sky. Suddenly, a long beam wooshed its way from stick to net and we could actually tell what was going on! Hooray! But, wait, Fox forgot to address the root of the problem: That most Americans don't give a shit about hockey. The laser, like the game itself, lost popularity and was eventually pulled.

Alas, Fox was not done with the laser. They put a beams on fastballs, on arcing football passes and whatever other speedy object we Americans just could not keep up with. They introduced Scooter, a creepy talking, animated 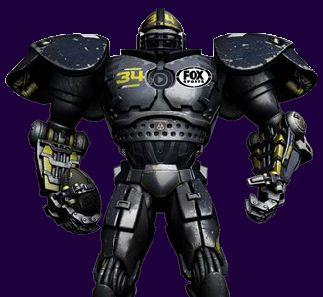 baseball that told us the trajectory of pitches, a menacing, Terminator like football character that jumps up and down, and an utterly pointless graphic showing how far off first base a base runner leads; If a runner is three feet from first, it doesn't mean they will be safe at second if they steal.

So why does Fox trot out these innovations year after year? FoxTrax+, like its brothers and sisters before, usefully mask the real problem of Fox baseball: Terrible announcers that detract from your viewing pleasure. It's a negative sum game in which they have to invent contraptions to increase your TV happiness.

Which brings us back to the point of exploring the virtues of FoxTrax+. The basic facts: It tell us two things, one of which we usually know. Alerting viewers that pitcher X just threw the ball 95 mph has been a ubiquitous part of the game for some time. It's a neat little foray into a game that is defined by its deep dependence and love of numbers.

The second number, though, is a futile attempt at creating an interesting baseball narrative. It's a waste of space that is worthless to the point of inanity and useless to the extent it is pointless. In short, it is Fox baseball.

Through the years, Fox has pushed the envelope in technological sports advances. They helped pioneer the first-and-ten line in football and provided useful information during car racing that floats above Nascar vehicles. But, for every useful graphic comes a useless laser beam that takes us two steps back.

I applaud them for their ingenuity but, like Edison's failed inventions, Fox needs to take a good long look at each new FoxTrax and realize that a useless dud, no matter how flashy, is still a dud.