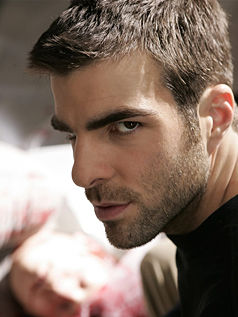 Sylar features prominently in tonight's "Heroes"
Ten days ago we bitched about NBC's cancellation of "Southland" and we had a lot of dialogue about that. Now the industry wonders if this move will result in creatives avoiding NBC because why work for a place that would cancel the best-reviewed and highest-rated freshman series in 2008-09? Oh yeah, and it was a series created by John Wells Productions, the guys that created, among other things, "E.R.", which only won about a jillion Emmys and provided NBC with hundreds of millions of dollars in advertising dollars.

There's a lot of NBC comedy programming that is great but we feel this move will make it much more difficult for good dramas to reappear on the Peacock. "30 Rock", which just won several Emmys a few weeks ago, debuted to a smaller audience on Thursday, so comedy can't be the only crutch to support this machine.
—-
Wait - NBC just found a rescuer by the name of: .....Jon Bon Jovi. Yup, the icon of Jersey will be performing on the "Today" show not once, but four times next month along with many appearances on the network and its other cable properties, including an episode of "Inside the Actor's Studio" to talk about ....all his great acting.

8:00pm How I Met Your Mother CBS - Barney wants Robin to become an American citizen

8:00pm Heroes NBC - Sylar starts on a path to rediscover his true identity; Hiro shows Emma the possibilities that go with having an ability

8:00pm House FOX - The team takes on the case of a police detective whose father, grandfather and great-grandfather all died of sudden heart failure

9:00pm Gossip Girl The CW - Vanessa vies with Blair for the honor of delivering the freshman toast at NYU

9:00pm Trauma NBC - Tyler and Boone respond to an explosion at a Chinese restaurant; Nancy's advanced medical training is put to the test