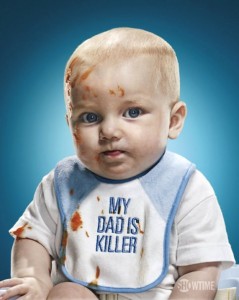 For "Dexter" Showtime has launched complimentary interactive games along with a new season
On Friday we talked quite a bit about tonight's premiere of the documentary "Monty Python: Almost the Truth (The Lawyer's Cut)" on IFC but we don't want that to totally eclipse your other options this evening: "Curb Your Enthusiasm", "Bored to Death", "Californication", "Mad Men", and, of course, "Dexter". Thankfully, these are all repeated at some point during the week but with "Dexter" there is a special twist this season as avid watchers can field questions posted on the "Dexter" Facebook page or Twitter feed and answer them at "Dexter's Follow the Code".

As you answer the questions, pixels are removed from images and videos revealing more about what will happen to America's favorite serial killer. We thought we were pretty knowledgeable about the series but we were forced to dig a bit deeper because the questions were a challenge! The game, created by bpg for Showtime, provides clues on the Twitter feed as well as on the Dexter Facebook page which has an impressive 860,000+ members. Between "Follow the Code" and the excellent Dexter iPhone game, Showtime is one of the few networks that seems to be firing on all "interactive" cylinders.