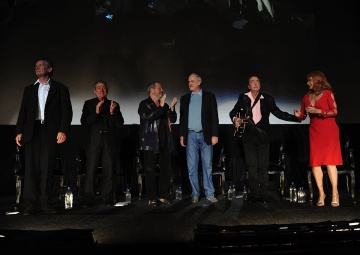 The surviving members of Monty Python at last night's premiere of "Monty Python: Almost the Truth (The Lawyer's Cut" which premieres on IFC on Sunday at 9pm. [Photo courtesy of IFC]
Weekend Edition

The world watches an empty balloon that could be part of a stunt to get a reality show, hmmm, that makes us think that this particularly family could easily head down the "Jon & Kate Plus 8" route - and whoops, TLC is now suing Jon Gosselin. Unless there is some kind of massive intervention, nothing will end well for anyone in that family. Doubtless the machine is already at work to get 'balloon boy' and his family on TV be it their own reality show or in a Lifetime-style mini-series.
—-
Tonight we have the season finale of "Real Time with Bill Maher" which will have the always excellent Alec Baldwin and we've heard good things about "SNL" tomorrow night, hosted by Gerard Butler but we're focused on Sunday's premiere of part 1 (of 6!) of IFC's epic documentary on Monty Python so we're going to have to catch "Dexter", "Curb Your Enthusiasm", and "Bored to Death" when they repeat - decisions, decisions. Please check out our interviews and video coverage of the premiere of "Monty Python: Almost the Truth (The Lawyer's Cut)".

10:00pm NUMB3RS CBS - Don and the team investigate murders that they realize are being copied from scenes in a soon-to-be-released movie

9:00pm Robin Hood BBC America - Prince John visits Nottingham with mischievous intentions; Robin is up to something with a lucky woman.

8:00pm The Amazing Race 15 CBS - Teams battle the heat in Dubai while searching for water

9:00pm Monty Python: Almost the Truth (The Lawyer's Cut) IFC - Part 1. The group members discuss how their careers led to the culmination of "Monty Python".

9:00pm Dexter Showtime - With Rita and the children out of town, Dexter gets time to himself.

9:00pm Curb Your Enthusiasm HBO - Larry learns to embrace the upside of disability

9:00pm The Phantom of the Opera TCM - (1925) A mad, masked composer (Lon Chaney) lures a Parisian singer (Mary Philbin) down to his realm

9:30pm Bored to Death HBO - A Russian parolee hires Jonathan to track down a singer; George decides to get in touch with his feminine side.

10:00pm The Girls Next Door E! - Hef and Crystal join the twins in Vegas + other shenanigans

10:00pm Mad Men AMC - The firm celebrates a milestone; Peggy and Paul compete on an account.

In case you didn't get enough of the "30 Rock" premiere last night, here's some behind the scenes video: