At the premiere of IFC's "Monty Python: Almost the Truth (The Lawyer's Cut)" at the Ziegfeld Theater in New York City on October 15th LAist's TV Junkie met all the remaining Pythons other than Eric Idle: Terry Jones, Carol Cleveland, Terry Gilliam, Michael Palin, and John Cleese. They keep saying that the friendliest Python is Michael Palin but that was impossible to tell as they were all so very kind and patient standing outside in the rain in 40 degree weather (poor Carol Cleveland!).

Also on the red carpet were Bruce Dickinson (from Iron Maiden), and Rich Sommer (aka Harry Crane from AMC's "Mad Men"). Sommer was in NYC to shoot an episode of "Law & Order" which will broadcast in January sometime. We learned from John Cleese that he is about to embark on a 3 week stint of solo shows starting with a comprehensive tour of the West coast. We also saw Steve Coogan and Jeremy Piven but they didn't have time to chat.

IFC's epic 6-hour documentary begins broadcast this Sunday at 9:00pm and is worth every minute of your time. You learn not only about the history of Monty Python but about influential British programs like David Frost's "The Frost Report" and "The Goon Show" whose cast included Peter Sellers, as well as the censorship that Python ran into in both Britain and the United States.

Over 40 years later, "Monty Python's Flying Circus" continues to have an impact on television, film, and comedy, and this series provides more insight than anything we've seen so far. A huge section of IFC's programming for the remainder of the month is taken up by episodes of Monty Python's television episodes as well as their films. Be sure to check IFC's schedule.

After the screening of a 2 hour theatrical version of the documentary, the Pythons took questions from the crowd and closed with a beautiful rendition of "The Universe Song" by Eric Idle (see video below) after which they received a Lifetime Achievement Award from the British Academy of Film and Television Arts (BAFTA). 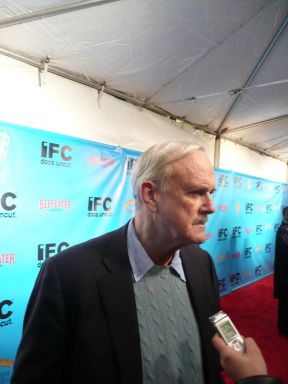 John Cleese on the red carpet at the premiere of "Monty Python: Almost the Truth (The Lawyer's Cut)" at the Ziegfeld Theater, NYC, October 15th, 2009. (Photo by Thomas Lewis)