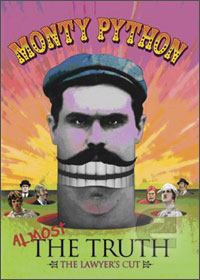 We'll be at the Monty Python reunion tonight in NYC. Watch it on USTREAM and watch the documentary on IFC starting this Sunday on IFC
Tonight we'll be at the premiere of IFC's "Monty Python: Almost the Truth (The Lawyer's Cut)" where the remaining Python's will reunite onstage - you can watch the historic even live on USTREAM starting at 6pm but stay tuned for our video interviews tomorrow.
—-
Some notes on morning programming as a couple new shows have started up fairly recently: Al Roker is a really busy guy, not only is he all over the "Today Show" on NBC but he also feels that he needs to do even more forecasting over at The Weather Channel with "Wake Up With Al" which airs at 3am and 7am. Roker usually (somehow) has a celebrity guest in the studio with him at these ungodly hours.

Meanwhile, E! is vying for your eyeballs with "That Morning Show" produced by iBC TV, which airs seven days a week from 6-9am. Shot in Orange County, the show somehow doesn't feature traditional commercial breaks, but rather, incentive gift cards that viewers can request online until they run out.
—-
What's great about the Python USTREAM feed is that you can watch it online while the "30 Rock" premiere airs.

8:00pm Community NBC - Chang threatens to fail the entire class if the cheater does not come forward

8:00pm FlashForward ABC - Mark thinks Demetri is letting his fear take over his life; Nicole reveals her shocking vision that involves a murder.

9:00pm The Office NBC - Dwight and Andy convince Michael that an insurance salesman who visits the office is part of the Mafia

9:00mp Fringe FOX - In Seattle the team investigates a man's attack on his boss, who he thought was a ram-horned demon

10:00pm It's Always Sunny in Philadelphia FX - The waitress is getting married, Dee is jealous that she's beating her to the altar, so she tries to derail the wedding.