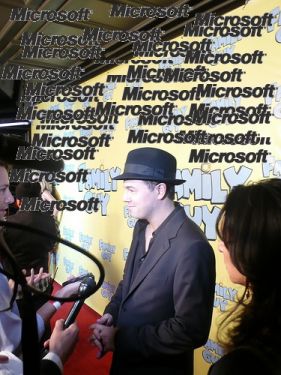 Seth MacFarlane does a deal with Microsoft
Looks like "Family Guy"/"American Dad"/"The Cleveland Show" creator Seth MacFarlane is coming through on the idea of a music/comedy variety show. When we attended his "Family Guy" Pre-Emmy party (check out the vids) we marveled at his cabaret prowess an it looks like there were additional admirers at FOX and...... Microsoft? Yeah, MacFarlane will shill Windows 7 as part of the "Almost Live Comedy Show" special as part of an all-Seth MacFarlane night on November 8th. According to Variety, MacFarlane and co-host Alex Borstein "will use what is described as ridiculous and bawdy comparisons to describe what's 'as simple as Windows 7' and what's 'more difficult than Windows 7'" during live-action segments of the show.

Uuumm, what do you think about this? We recognize that advertising is getting further integrated into programming, for example, the virtual car and cell phone commercials in shows like "24" and "Damages", and admire "30 Rock" for (profitably) poking fun at them, but is this MacFarlane exercise going too far? To make the commercial part of the comedic content seems to be a bit too much. Another problem is that MacFarlane is an excellent performer, and he will probably pull this off really well and this could lead to attempts by other networks, with shabby results.
—-
Someone asked us why yesterday we wrote about Thomas Lennon's new show at NBC by not Matthew Perry's new show at ABC. Uh, let's see, while we recognize Matthew Perry's long and successful stint on "Friends" he hasn't demonstrated a proclivity for creating new shows and content like Thomas Lennon. We wish him well but think he's just part of the "Friends"-nostaligia arms race between a couple networks.
—-
Note that Monty Python will be on Jimmy Fallon tonight and tomorrow we hope to speak to a few of the members at the premiere of IFC's 6-hour documentary on the icons.

8:00pm America's Next Top Model The CW - The models must find their way around Los Angeles during an afternoon of go-sees

9:00pm Glee FOX - To cause dissension among members of the glee club, Sue forces the students to compete against one another