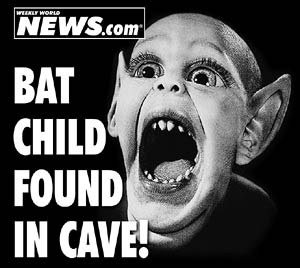 The Weekly World News has signed with CAA which may mean that Bat Boy will be coming to a screen near you! (photo of Bat Boy courtesy WeeklyWorldNews.com)
We're hoping that the Weekly World News' Bat Boy finally puts the kibosh on all this vampire nonsense we're having to deal with lately. The WWN has signed with CAA in the hopes of getting Bat Boy and many of its other characters on both/either the big or small screens. President Obama should be ready to allot more funds to the research of the white nose syndrome decimating the bat population because word has it that Bat Boy will be in Oslo in December when the President is expected to pick up his Nobel Prize.
—-
We are happy to hear that Thomas Lennon of "The State", and most recently "Reno 911!" will be creating a show for NBC with frequent collaborator Robert Ben Garant. As of last night, no ETA on the show but we can't wait.
—-
On Thursday we will have a chance to speak with some of the surviving members of Monty Python [video to come!] so if you have any questions that you'd like them to answer, please put them in the comments! Also, to remind you, IFC's Monty Python content starts broadcasting this Sunday - for details, check out our post.

8:00pm 90210 The CW - Silver and Kelly deal with shocking news about their mother; Jen asks Naomi to loan her a large sum of money

9:00pm Dancing With the Stars ABC - A celebrity is eliminated.