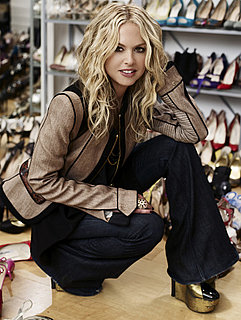 Season finale of Bravo's "Rachel Zoe Project" at 10pm. Dear readers, did you watch this show? Give us the lowdown.
What were your TV highlights of the weekend? For us it was all about Sunday: "Curb Your Enthusiasm" deviated from the "Seinfeld"-reunion storyline which was welcome - it's a good idea but an even better one not to over-exploit it. Larry David manages to create yet another 1/2-hour of toe-curling embarrassment this time featuring real-life couple and series regulars Ted Danson and Mary Steenburgen. 9:30's "Bored to Death" was fantastically hilarious and while Parker Posey was perfect in her guest role, we feel like we just didn't get enough of her (for our liking). We finished the evening off with the raunchy humor of Showtime's "Californication" and while David Duchovny's Hank Moody sometimes feels a bit one dimensional, it's the supporting cast and guest stars like Rick Springfield that makes us feel that the show has the legs for at least a couple more really good seasons.
—-
What we effed up: Not Tivoing "Mad Men" so we're watching it later tonight. Not that you can spoil it for us since it will probably involve Don jumping in the sack with yet another woman, some new account or other work crisis, and Betty doing something risque. We're not saying that the show is predictable or boring because these are major plot points for almost any show and what makes "Mad Men" special is the style and delivery. Cheers.

---
Since the Angels swept the Red Sox, it looks like there'll be several more hours of programming available for Turner but we haven't seen them make any substitutions on the schedule yet.

We love TV, it's our job/addiction, so that we means we're blogging about it, tweeting about it, and on dozens of Facebook fan pages all the time, resulting in the fact that we're largely absent from our children's lives. It turns out that we're not alone as Variety discovered: there's tons of fan-generated content and discussions and show creators/marketers are figuring out how to get involved - some seem shallow and opportunistic, others seem genuinely interested.
---
The TV Junkie Plan: "House", "Big Bang Theory", "Ultimate Cake Off", "The Daily Show", Letterman, Fallon.

8:00pm How I Met Your Mother CBS - Lily and Marshall come on too strong to impress Robin and Barney, who then try to break off the double-dating.

8:00pm House FOX - A wealthy businessman brings his teenage son to the hospital and insists on having House handle the case

8:00pm Heroes NBC - Samuel gets ready for new additions to his family; Claire thinks her roommate might have a hidden agenda

9:00pm Gossip Girl The CW - Rufus and Lily move up their wedding date; Chuck uncovers a secret that Carter was hiding from Serena

9:30pm The Big Bang Theory CBS - Raj faces deportation if he does not find a job