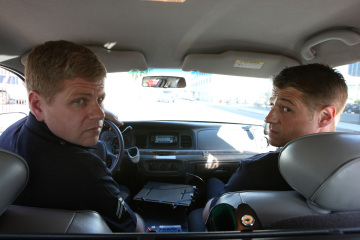 It's difficult not to look back in anger as NBC cancels "Southland" in sacrifice to the blind idiot god of Leno's 10pm slot.
NBC's edgy cop drama "Southland" has been given the ax - a victim of the network's Leno-ization of the 10pm slot. The series was supposed to restart on October 23rd and was in the middle of shooting the 6th episode but now thoere's no word on if and when the finished episodes will ever air. This was a good show and it's a goddam shame it won't be continued. Oh, and who's on Leno tonight? Football dinosaur Terry Bradshaw, thanks for scraping the bottom of the barrel for that, NBC.
—-
From tsunami-watch to bad-acting-watch, news has it that Hawaii will be subjected to a CBS reworking of "Hawaii Five-O". Since "Fringe" co-creators Alex Kurtzman and Roberto Orci are writing the pilot, we will give it at least that shot, but unless they have continued involvement, we don't have a lot of hopes for the show.

---
There's some great TV this weekend but it's starting with what appears to be the swan song of "Ugly Betty" tonight as moving the show to Friday's will kill it. "The Soup" will doubtlessly feature Joel McHale's exchange with a testy/weird Richard Belzer on "Jimmy Kimmel Live" earlier this week (we suggest they implement a "Belzer-watch" segment because of his proclivity to generate zingers). Saturday KCET will feature a documentary on the Los Angeles Times-founding Chandler family with a Drew Barrymore-hosted "SNL" later in the evening.

Sunday night is always complicated and this week will be no exception: the great "Dexter" takes a back seat to "Curb Your Enthusiasm" and (more importantly) "Bored to Death" which somehow gets better each and every episode. Then we suggest jumping back to Showtime for a round of "Californication" which will feature an appearance from Rick Springfield and a shot of his '80s ass. Then over to AMC's "Mad Men" to bring our weekend down to a level of pseudo-depression and hopelessness. For those without any premium channels, consider watching the Discovery Channel's 9pm documentary on the unearthing of the 4.4 million year old hominid Ardi cuz you might be related. Please check out the full listing of highlights below.
---
The TV Junkie Plan: Tonight - Bill Maher, "Monk", "The Soup", Letterman, Fallon. Saturday - "Inventing LA: The Chandlers and Their Times", "SNL". Sunday - "Curb Your Enthusiasm", "Bored To Death", "Californication", "Mad Men".

9:00pm Dollhouse FOX - Victor and Echo's imprints collide when Victor is sent on an assignment as the psychotic nephew of a Dollhouse shareholder

10:00pm Crash Starz - Ben and Anthony visit the athletic club where Cassie was murdered, but are dissuaded from investigating further.

9:00pm Inventing LA: The Chandlers and Their Times PBS/KCET - For four generations, the Chandler family influenced many through the Los Angeles Times

10:00pm Wanda Sykes: I'ma Be Me HBO - The comic performs at the Warner Theatre in Washington, D.C.

12:00pm Countdown to Doomsday The Weather Channel - Today show host Matt Lauer takes viewers through 10 different scenarios that could bring about the end to all life on Earth. This special not only looks at the potential for the end of the world, but also possible solutions to avert such catastrophes.

9:00pm Discovering Ardi Discovery - Investigation whether a 4.4-million old hominid skeleton could be an ancestor of humans.

10:00pm Mad Men AMC - Don and Sal have trouble giving the clients what they want; Betty hosts a fundraiser.