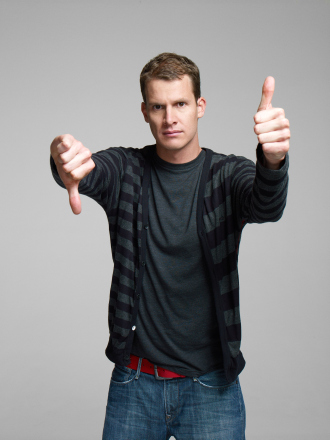 Season 2 of "Tosh.0" hosted by comedian Daniel Tosh, premieres tonight on Comedy Central at 10 p.m. | Photo by Mattias Clamer courtesy of Comedy Central
Daniel Tosh is a fast paced, filter-free Floridian with a style of comedy that can accurately be described as "honest and unguarded." Tosh, however, simply describes his act as "I just make stuff up."

Making stuff up has earned the national headlining comedian a huge following. Tosh, who is a graduate of the University of Central Florida tell us, "I’m at a point, now, where people that like what I do come to see me but for the first ten years it was just people who happened to showed up at a comedy club where I was performing."

Earlier this year, the German-born comedian successfully made the jump from the stage to the small-screen with Comedy Central's "Tosh.0," a Web-clip show that debuted in June. Tonight Tosh and his collection of hilarious videos found on the Web are back for a brand new season of Tosh.0 at 10 p.m. on Comedy Central.

Tosh, who told us he'd prefer the title of "The Most Famous Man in Show Business Who Doesn't Have to Work" over "The Hardest Working Man in Show Business," took some time out from his busy schedule to talk to LAist about his similarity to Jesus, rubber-band ball statistics, his pitch for Michael Richards, the Internet's impact on comedy and telling Kobe Bryant jokes in front of Jerry Buss.

1) How did you end up In LA? Your Wikipedia page says you graduated from UCF and then you were in LA doing comedy. It doesn’t really mention anything that happened in between.
It’s a lot like Jesus and you just don’t hear about that 18-25 age range of my life. I finished school and tried to do stand-up. Nothing eventful really. I just got in my car going from comedy club to comedy club and eventually headed out to LA and became a huge star weeks later.

2) What do you think was your big break?
I’m waiting for it. I have literally taken fucking baby steps in this business. I’m dying to skip a few steps. I don’t know if I’ve had my big break. The most helpful thing was when my hour special got put on Comedy Central. That definitely opened me up to a bigger audience. Now having my own TV show has certainly helped.

It wasn't your first appearance on Letterman, when you were bumped?
I did get bumped. I got to go on the show, I just didn’t get to do stand-up. I just got to talk to Dave on the panel which was good but I was little angry because I got bumped by a guy who had the second largest rubber-band ball. For the record, he wasn’t even like number two and creeping up on the number one largest rubber-band ball. He was a very distant second.

3) How did you come up with the concept for "Tosh.0?"
Comedy Central wanted a really cheap show that involved Internet stuff so I said how about a show about the Internet? And they were like 'Good, let’s do this.'

I was already in a deal with a Comedy Central. I shot a presentation and they liked it so much that they said do it again. Eventually we did a pilot and the show got picked up and it got picked up again. And here we are. It’s silly, it’s stupid and I know there’s a million versions of the show that are out there.

4) Is it difficult to track people down and convince them to do the "Web Redemption" segments?
Most people. Almost all of them. It’s a tough sell. Since the show’s been on for a little bit maybe it will get a little easier.

Everyone says they don’t want to do that. They assume we’re going to belittle them or make fun of them or they want to get past that part of their lives. We certainly don’t have enough money to make them completely abandon their morals.

Trying to find these people is insane. Something funny online could be from a random guy in a third world country that didn’t even know that his video was uploaded. Sadly our staff is tiny, it’s just us tracking them down and seeing what we could do.

Some people are bigger than others and just don’t want to do it. I’ve been pitching a "Web Redemption" for Michael Richards to do his stand-up set at the Laugh Factory in front of an all-black crowd but I don’t know if that’s going to happen any time soon.

5) How do you think the Internet has both helped and hurt stand-up comedy?
It’s helped because it allows the audience to have access to a lot of different people. It’s very easy to just look someone up and watch some clips of their act and see if they’re your cup of tea or not.

It certainly hurts stand-up comedy in that some people think that a good marketing strategy should offset actually being a great comic.The reality is, just because everyone knows you’re a stand-up doesn’t mean everyone’s going to like you. I would love it if people would spend a little less time trying to trick people into coming to see them. Just let it happen by people telling their friends other people, 'You should go see this guy, he's funny.' But what the fuck do I know? 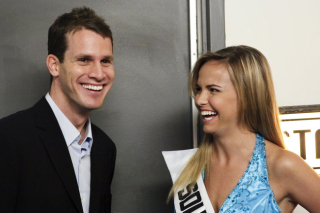 Daniel Tosh and Miss Teen South Carolina 2007 | photo by Michael Underwood courtesy of Comedy Central
6) Is there any rivalry between your show and Chris Hardwick's show "Web Soup?"
No. I’ve seen his show and there’s zero rivalry. I know there’s a million different clip shows, I just wanted to call mine 'Tosh.0' so that it would be very hard to recast.

In general, it seems like there's a rivalry amongst comedians. Is it difficult to be friends with other comedians because of this?
No, not at all. I think that’s why it comes across badly when you shit on comics that you don’t like. We are in nature extremely opinionated. I have nothing but respect for a majority of comics. There are a handful of comics that I’m like 'God that’s awful.'

Most of my best friends are comedians. I’m always hoping for the best for all of them, but within reason. I don’t want them to completely surpass me.

7) Would it be safe to say that you're a Kobe hater?
Yes. I would say I despise the Lakers and let’s put Kobe at the front of the list. Like 99% of this town I’m not from LA so I’m not going to pretend to root for LA teams.

In my 12 years here, I will say that I’ve slowly fallen in love with the Dodgers. For the most part, I root for Florida teams. Because the fanatics are insane it’s fun to bash them especially when you live in this town.

I’ve performed in front of Jerry Buss before and I did all of my Kobe jokes. He laughed at all of them. His 19 year-old Asian date didn’t laugh but he was laughing.

I didn’t know ahead of time that he was going to be there but was told the second I came in that he was there. Everyone in the audience was aware that he was there too so it made the jokes a little more uncomfortable because nobody was watching me tell the Kobe jokes, they were just watching Jerry react to them.

Season 2 of Tosh.0 premieres tonight on Comedy Central at 10 pm