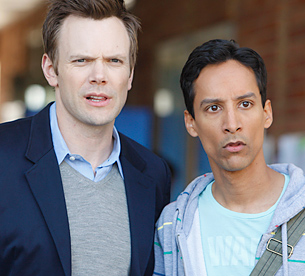 These guys might look confused because "Community" is now on at 8pm on NBC
Will you like Drew Barrymore's Whip It? We know at least one person over at the LA Times that did. As mentioned earlier today, Ellen Page (Juno) who stars in the movie will be producing a single-camera comedy for HBO called "Stitch N' Bitch" that she will co-write with actors write with two other young actors, Alia Shawkat and Sean Tillmann (aka Har Mar Superstar). The story follows two hipsters as they relocate from Brooklyn's Williamsburg neighborhood to Los Angeles' Silver Lake in a bid to become artists. No release dates set yet.
—-
Speaking of HBO, the network will be presenting a documentary on November 19th about last year's Mumbai terrorist siege. "Terror In Mumbai" is a collaboration between HBO and the UK's Channel 4 and it will be narrated by Fareed Zakaria who seems to be on "The Daily Show", CNN, and NPR at least once a week. Now you'll get at least a 2-hour shot of him.
—-
In programming of note, tonight KCET's Emmy-winning series "SoCal Connected" returns to our TV sets with a premiere that focuses on distracted driving and its very real dangers with local examples and participation from Car & Driver magazine.
—-

8:00pm FlashForward ABC - An imprisoned Nazi claims to have knowledge about the blackouts. Nazis? Has the show jumped the shark already?

8:30pm Parks and Recreation NBC - Leslie, nervous about her first date with Dave (Louis C.K.), goes on a practice date with Ann

9:00pm The Office NBC - The office mates travel to Niagara Falls to celebrate Jim and Pam's wedding; Michael, Dwight and Andy want to hook up with wedding guests

10:00pm It's Always Sunny in Philadelphia FX - The Gang Gives Frank an Intervention