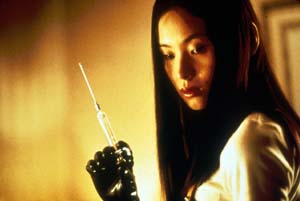 Takashi Miike's suspense-horrorfest "Audition" came out on DVD/Blue Ray yesterday
Takashi Miike's 1999 film Audition has made it to Blue Ray and a 2-DVD collector's edition this week. The film electrified (and horrified) the festival circuit 10 years ago and this packaging of the film will only add to the director's cult status in the States.

Primarily known for his crime and yakuza-themed movies, the kinky horror of Audition is a thematic departure but is still true to Miike's directorial oeuvre. Even occasional viewers of Japanese cinema will recognize the faces of Ryo Ishibashi (The Grudge) and Jun Kunimura (Ichi The Killer) so at least someone familiar will guide you into the psycho-sexual territory covered in Audition.

Without giving away too much, Ryo Ishibashi's character, Shigeharu Aoyama, finds himself urged to date after being a widower for seven years. His film producer friend played by Jun Kunimura comes up with the idea of setting up an "audition" to create a pool of young ladies for Aoyoma to choose from. Aoyama quickly becomes fixated on one beauty, Asami played by Eihi Shiina, who ends up being a lot more than he bargained for.

As Aoyoma finds out more about the object of his desire, he descends into a dreamlike world where he experiences visits from his dead wife and other events that may or may not actually happen. Some of these experiences are truly horrific, resulting in a film that even freaked Rob Zombie out among other notables.

Miike has said that the film isn't about a particular social construct but it's difficult not to think about the various stories of struggle between Men and Women: objectification, manipulation, predation, etc. Thankfully none of these Big Issues obscure a suspense and horror filled story that appeals to anyone interested in a great movie.