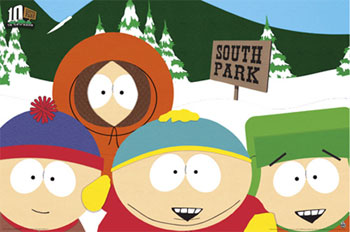 "South Park" season 13 will premiere at 10pm on Comedy Central
"South Park" returns for a new season tonight and if you've got Xbox, they're launching a "South Park" game today as well. Season 13 will feature a hidden alien in each episode and if you find them all, you can enter to be a "South Park Citizen" and have your animated countenance to appear in a Season 14 episode.
—-
We mentioned yesterday that David Letterman's Monday night broadcast took NBC for a tumble but let's give "Monday Night Football" some props as the Vikings-Packers game was the most watched program in cable history with almost 22 million viewers.
—-
We were happy to learn that HBO's "Bored to Death" has already been picked up for another season and we were even happier to learn about a series of conversations with comedians called "Behind the Green Room Door" will be making it to Showtime in 2010. The show was shot at The Vanguard in Hollywood and features the likes of Jonathan Winters, Eddie Izzard, Robert Klein and Penn Jillette among others.
—-
The LA Times reports that dog-torturer-and-killer Michael Vick will be further punished by being given his own reality series on BET. Whoops, we meant that we were getting further punished. Don't expect to find any updates on that show or its content in this column.
—-
The TV Junkie Plan: "The New Adventures of Old Christine", "Modern Family", "South Park", "Secret Girlfriend", Kimmel.

8:00pm The New Adventures of Old Christine CBS - After discovering a suspicious mole, Christine panics when she cannot get into a doctor's office fast enough

8:00pm America's Next Top Model The CW - Ninja teaches the contestants to dance without expressions on their faces

9:00pm Glee FOX - The boys compete against the girls in a mashup showdown

9:30pm Cougar Town ABC - Family and friends get in the way of Jules' 10th date with her boyfriend

10:00pm Man Shops Globe Sundance - Series Premiere. The show has the potential to be either inspiring or just a slick commercial for Anthropologie.

10:30pm Secret Girlfriend Comedy Central - Buddies start hanging out at a strip club for the buffet.