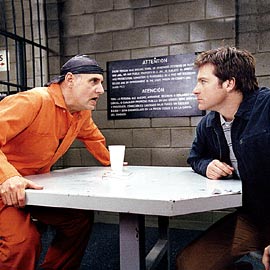 Good luck on getting the cast of "Arrested Development" together for a movie - there will be arguments
OK, so the Letterman stuff happened like a million years ago last week but get ready for a fresh round of jokes this week as Stephen Colbert, Jon Stewart, and Craig Ferguson finally have their chance to rise and take the bait. Will Ferguson actually take some potshots at his boss?
—-
Several months ago we wrote about the rumors of an "Arrested Development" movie in the works and yesterday confirmation of a script made it to the newswires. But with a requirement that the entire original cast be on board makes it all the more unlikely that it will ever be made.
—-
So have you liked "FlashForward" (and its scenes shot in the interior of the LA Times)? Do you travel a lot? Then there's a good chance that you'll see the show in any one of 100 countries/territories worldwide as Disney rolled the show out worldwide within a week of its debut in the States.
—-
We just created a Twitter account for The TV Junkie - please follow us!
—-
The TV Junkie Plan: "House", "Outrage", Letterman, Fallon.

8:00pm How I Met Your Mother CBS - Robin investigates when she thinks Barney is cheating on her, only to find that he is spending his time with Ted

8:00pm Dancing With the Stars ABC - The hoofers hoof it

8:00pm Heroes NBC - Hiro focuses on saving the lives of others; Angela tries to help Nathan remember his past; Tracy tries to get her old job back.

9:00pm Jon & Kate Plus 8 TLC - New episode, but really, what is the point of watching this show right now with all the shit going on in, around, and on top of it?

9:00pm Outrage HBO - (2009) Filmmaker Kirby Dick examines the hypocrisy of certain closeted politicians who actively campaign against the LGBT community to which they secretly belong.