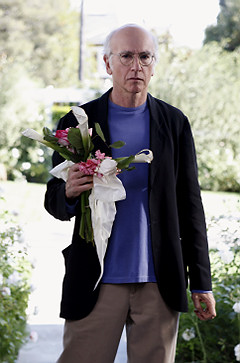 The TV world (and other worlds) is abuzz with David Letterman's statement yesterday regarding his sexual relations with female employees and an associated extortion attempt. Whether or not Letterman engaged in these activities after marrying his longtime girlfriend in March, It makes us wonder what kind of release one has to sign if becoming an employee in the entertainment industry these days. Regardless of any moral outrage, he has to be given props for coming out as soon as he could about it, the same day he gave his grand jury testimony.
—-
The "Seinfeld" reunion story arc on "Curb Your Enthusiasm" begins this Sunday on HBO at 9pm. The season will culminate with the "reunion show" but this Sunday the seeds are set and the various players will be tapped. A few seasons ago there was a Broadway show within the show leveraging "The Producers" but this TV show within the TV show will get pretty convoluted and promises to be very funny in that squirm-in-your-seat-with-discomfort that Larry David has mastered. [Also of note for Sunday: an excellent 2nd episode of "Californication" (Showtime, 10pm) followed by the season finale of "Entourage" (HBO, 10:30pm)
—-
ABC's set of Wednesday night comedies seems to have locked down the night for the network. The powerhouse, as we called it last week, is "Modern Family" and "Cougar Town" somehow is retaining 100% of the audience from it's lead in much to our surprise. Do you have a favorite Wednesday night show on ABC? If not ABC, then where?

10:00pm The Soup E! - FYI: Lee Farber from "The Soup" will be on "The Wendy Williams Show" on Monday like in some kind of crazy cross-pollination.

10:00pm Crash Starz - Forgot to mention that this show has a new season that just started.
Tonight

9:00pm Dollhouse FOX - Echo's maternal instincts kick in when she is imprinted as the mother of a newborn baby

9-11:00pm The Prisoner IFC - 3 episodes of the Patrick McGoohan classic!

10:00pm NUMB3RS CBS - Don's team investigates when two members of a unit led by his former mentor are killed during a shootout with bank robbers.

9:30pm Bored to Death HBO - A filmmaker is interested in having Jonathan rewrite a screenplay; George runs into his ex-wife and her new husband.