Not an Immigration Raid: American Apparel Forced to Fire 1,800 Workers 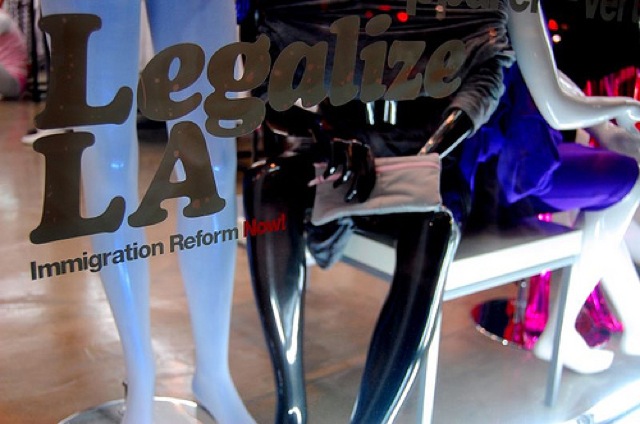 Photo by Melle Music via LAist Featured Photos on Flickr

The Bush era of ICE raids are over. That, however, does not mean ICE is on the fritz. In what the New York Times calls "a showcase for the Obama administration’s effort to reduce illegal immigration," companies are being forced to "to dismiss unauthorized workers."

For American Apparel in downtown Los Angeles (you know their immigration slogan, "Legalize L.A."), that means about a quarter of its workforce, about 1,800 employees. A 17-month federal investigation found that there were "irregularities in the identity documents the workers presented when they were hired."

People are scratching their heads on why American Apparel, which is the antithesis of a company that exploits illegal workers with bad conditions and extremely low wages (AA pays higher than normal wages, gives health benefits). Mayor Antonio Villaraigosa called the move "devastating" and in a follow up editorial, the New York Times called this solution ludicrous:

President Obama and Ms. Napolitano inherited a failed immigration policy. They have promised do better in setting priorities, hunting down abusive employers and pressing for comprehensive immigration reform that will give workers hope and a path to legalization.

A crackdown that forces 1,800 taxpaying would-be Americans into joblessness in a dismal economy is a law-enforcement victory only in the bitterest, narrowest sense. As a solution to the problem of unauthorized workers — 1,800 down, millions to go — it’s ludicrous.

Although some of you are leaving the company, I want you all to know that when you are able to get your immigration papers in order, you will be given priority treatment, in terms of being interviewed for future positions with the company.

I am deeply disappointed that the Obama administration has failed to bring about immigration reform. Whereas I know he has the intention to do so, getting the job done is another story. Let’s not forget that George Bush wanted to bring about immigration reform, but could not get it done. Ironically, the rallying cry of the Obama campaign was the words of Cesar Chavez, “Yes we can” or “Si se puede”, which inspired so many people, particularly Latinos in the recent election.