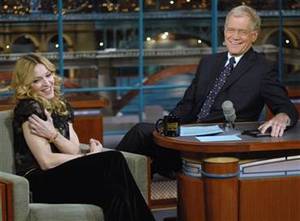 Madonna will be on "The Late Show With David Letterman" tonight at 11:35pm on CBS
ABC is launching a couple more comedies tonight but will any of them be better than "Modern Family"? Frasier is back on TV, really?
—-
We'll tell you who's back on TV tonight: Madonna on Letterman. Yeah, there's other stuff happening on late night TV but nothing will hold a candle to the anticipation of more antics between Madonna and Letterman.

8:00pm The New Adventures of Old Christine CBS - Richard and Christine are shocked when they realize how much their college buddies have aged.

8:00pm The National Parks: America's Best Idea PBS/KCET - Going Home (1920-1933) The automobile allows more people than ever to visit the national parks; campaign to protect the remaining virgin forest in the Smoky Mountains.

8:00pm America's Next Top Model The CW - The contestants try to stand out when Tyra wraps them in vibrant fabrics and photographs them

8:00pm Mercy NBC - Veronica and Mike move back in together but realize the house is as much of a mess as their marriage

9:00pm Glee FOX - Will tries to give the glee club more of an edge by bringing in a former classmate (Kristin Chenoweth)

9:00pm Modern Family ABC - Phil is determined to help Luke prove he is responsible enough to have a new bike