TV Junkie: Back to Hills; 'The Prisoner' Returns on Nov. 15th - UPDATED with 'The Office' Wedding Behind-the-Scenes Video 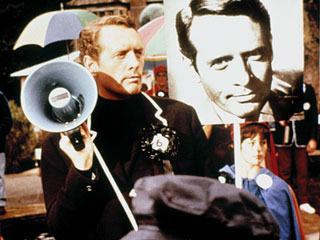 Season Premiere(s) of the Night:

The Hills (10pm on MTV): Most of the population would claim that they are Kardashian-ed out but it's remarkable how many of these same people know exactly what is going on with this clan. We support the show because it brings some of the best moments to E!'s weekly "Web Soup".
—-
Speaking of soup, check out "Web Soup" on G4 at 8pm and check out our red carpet interview with host Chris Hardwick at the Emmys (Chris appears at 7:12 in the video).
—-
The late great Patrick McGoohan will not be there to see AMC's remake his cult classic creation, "The Prisoner" begin airing on November 15th and while we're positive that what airs will not please devotees, we're excited because McGoohan had been wanting to get the series remade for decades.

8:00pm 90210 The CW - Sasha and Dixon drive to Napa for the weekend; Annie makes a shocking discovery; Navid and Adrianna spend the night togetherhttp://authors.gothamistllc.com/mt/mt.fcgi?__mode=view&_type=entry&blog_id=8

8:00pm The National Parks: America's Best Idea PBS/KCET - The Empire of Grandeur (1915-1919) The National Park Service is established in 1916; Stephen Mather campaigns to establish the Grand Canyon in Arizona as a national park.

9:00pm So You Think You Can Dance FOX - Tuesday night premiere

9:00pm Swords: Life on the Line Discovery - The season comes to an end and the Big Eye takes a gamble; a disappointing off load for the Sea Hawk ends their season

10:00pm Sons of Anarchy FX - When the MC heads north on a "charity" club run, they find more than just bike trouble when they cross state lines

10:00pm The Good Wife CBS - Alicia represents a stripper who says she was raped at the bachelor party of a prominent businessman.

10:00pm Dancing With the Stars ABC - A celebrity is eliminated.

We just got the below video this afternoon. "The Office" wedding episode will air on October 8th.