TV Junkie: 'Trauma' Premieres; What Show _Should_ Get the Ax? 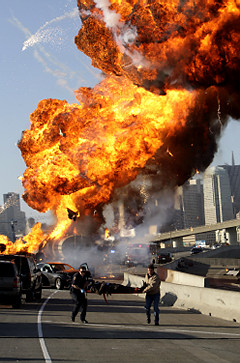 "Trauma" premieres on NBC at 9pm
Series Premiere of the Night

"Trauma"(NBC @ 9pm): Yes, "Trauma" is another drama in a medical setting but a major difference is its emphasis on action (surely you've seen the nearly-3D billboards all over LA). Starring Anastasia Griffith of "Damages" fame (check out our Emmys red carpet interview with her), the series focuses a lot more on the details and specifics of a situation rather than if the head nurse is having an affair with the hospital administrator. If you can tear yourself away from Ken Burns' latest epic, it would be worth checking out tonight.
—-
Did anyone see the "Dexter" and "Californication" premieres last night? What'd you think? We've been talking them up for the past few weeks and need some validation.
—-
Did anyone with an East coast feed see SNL's Jenny Slate say the f-word on Saturday? Thankfully we haven't seen a Southern Senator get his panties in a twist over this (yet).
—-
The CW has canceled "The Beautiful Life" marking one of the first casualties of the season. What show do you think will get cut next? Which one _should_ get cut but won't?

8:00mp How I Met Your Mother CBS - Ted realizes that the girl he goes on a blind date with is actually someone he dated years earlier

8:00pm Dancing With the Stars ABC - Baz Luhrmann serves as a guest judge.

9:00pm Gossip Girl The CW - Blair and Chuck both set their sights on an item for bid at Sotheby's

9:30pm The Big Bang Theory CBS - Penny and Leonard try to recover from an awkward hookup