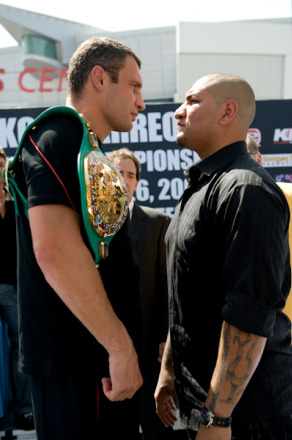 Name the last boxer of Mexican descent to hold the heavyweight title.

Go ahead. Do you give up? You can't name one, can you?

That's because there's never been one.

It's shocking that the rich tradition of Mexican fighters has never produced a heavyweight champion. Tonight that all can change when Riverside's own Chris "The Nightmare" Arreola challenges WBC heavyweight champion Vitali Klitschko at the Staples Center.

While the hometown heavyweight may not be a household name, some experts believe a win tonight could be exactly what Chris and the once glorious division needs. HBO boxing analyst Larry Merchant told the LA Times that Arreola has a shot at being the "heavyweight version of Oscar (De La Hoya)." Boxing promoter Lou Di Bella called him "the most compelling character we have — a Mexican kid with balls" in an interview with FoxSports.com.

This just a small sample of all the praise pundits of the sport have awarded Arreola. However, it will be a tall task, literally, for the undefeated #1 contender to leave the Staples Center being called "World Champion" by Michael Buffer tonight.

The 6-7, 252-pound Klitschko is a 6-to-1 favorite coming into tonight's fight. Klitschko, who relocated to LA along with his brother the current IBF, WBO, IBO and Ring Magazine world heavyweight champion - Wladimir Klitschko, has the highest knockout percentage (92%) of any heavyweight champion in overall fights. Only one of his 37 victories was not by way of knockout. Unlike last week's Mayweather/Marquez bout, there's a very good chance we're going to see a knockout.

"This will be a real heavyweight fight. I am more than sure that I will exit the ring as heavyweight champion of the world," declared Klitschko at Tuesday's press conference.

The champ is not the only one saying the Ukranian will win tonight's fight. Numerous boxing blogs are predicting the man known as Dr. Iron Fist will successfully defend his title. AOL's Fanhouse even went as far as to say that an Arreola victory would be an upset of the same magnitude as 20-1 underdog Hasim Rahman's fifth-round knockout of Lennox Lewis in 2001.

Rahman didn't have the hometown crowd backing him the way Arreola will tonight in the Staples Center.

For those looking to enjoy the fight from the comfort of their home, HBO's got you covered 10 p.m. ET/ 7 p.m. PT. No pay-per-view fees!