TV Junkie: The Battle For Sunday Night Begins in Earnest - Showtime Takes It (for now) 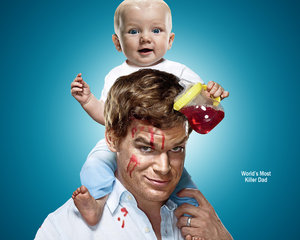 Why are we saying that Showtime takes Sunday night? Look at the scheduling. "Mad Men", while a darling of the critics (oursElvis included), has been even more slow-paced than usual this season and will be winding up soon. HBO has "Curb Your Enthusiasm" and the admirable "Bored To Death", but they are personality-driven comedies that almost require you to be a fan of Larry David and Jason Schwartzman, and while we are fans of theirs a comedy can't hold a stick to the visceral and compelling (and humorous in its own right) "Dexter" in the same time slot. Thank goodness for HBO OnDemand so that I can watch "Curb" and "Bored" later.

We've watched the first four episodes of "Dexter" and can tell you that every single one ends with you feeling as if there's no way the series can go on. For more insight on this season check out our video from the "Family Guy" pre-Emmy party where we talked to C.S. Lee and David Zayas from the show.

Now let's look at the 10pm slot. AMC's "Mad Men" (see our video of the cast at the Emmys press room) is the ranking drama at that hour, no doubt, but the series requires concentration and dedication in order to get the most out of it and while there are committed viewers, there aren't many who would be able to jump into the saddle and start watching the series as newbies. Let's look at Showtime's "Californication" which as a 1/2 hour comedy has a lot going for it for late Sunday night viewing: humor, drugs, drunkenness, and nudie bits. If you don't have Showtime, do your best to get to a friend's house for the season premiere as Ed Harris has a cameo that simply can't be missed. Also, be aware that David Duchovny's Hank Moody has penned a novel for real-life bookstores called "God Hates Us All".
—-
If you've got a kid and/or are a Wilmer Valderrama fan, you should know that tomorrow there will be an exclusive premiere of "Handy Manny Motorcycle Adventure" at the Arclight. Wilmer, the voice of Handy Manny, will be there along with other celebs starting at 10:30am. The special will air on the Disney Channel on October 4th at 7pm.
—-
There's a ton of premieres this weekend with actors and performers who we interviewed at the Emmys last weekend. We have videos that include cast members from "Mad Men", for "Dexter" check here and here, for "Family Guy", "Amazing Race", "The Cleveland Show",
—-
The TV Junkie Plan: Tonight - Bill Maher, "Monk", "The Soup", Letterman, Ferguson. Saturday - "Robin Hood", "SNL". Sunday - "The Cleveland Show", "Dexter", "Californication", "Entourage",

10:00pm Anderson Cooper 360 CNN - If you didn't get enough Bill Clinton on Letterman, watch Andersoon Cooper have a talk with President Clinton

9:00pm Curb Your Enthusiasm HBO - Larry deliberately tries to annoy Loretta; Larry profits from Leon's indiscretion with the wife of a depressed friend.

9:30pm Bored to Death HBO - While trying to win back Suzanne, Jonathan is hired to follow a man and discover if he has been unfaithful.

10:30pm Entourage HBO - Eric gets news from Drama about his latest fling; Terrance offers to sell Ari his share of the agency

Did you catch "Community" last night? Time for some Spanish rap from Los Chicos