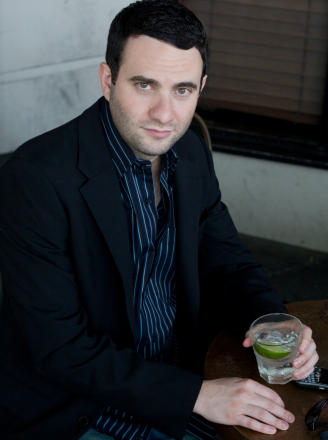 Comedian Aaron Karo's latest book I'm Having More Fun Than You is available now.
Nationally headlining comedian and best-selling author Aaron Karo is 30, single and loving it. The New York native who walked away from a Wall Street job to jump into a career in comedy isn't going to abandon the bachelor life to leap into marriage anytime soon, even if all of his friends are.

In his new book, I'm Having More Fun Than You the LA-based comic shares with readers exactly why he's perfectly happy to live a life free of commitment and full of nights spent chasing chicks at the bar. Karo's book, which was the top selling comedy book on Amazon.com last week, is a celebration of singlehood through anecdotes, observations and a few tips along the way.

Karo, whose comedy writing career began as a freshman at the University of Pennsylvania with an email to 20 friends about college which would turn into an email column called Ruminations that continues to go strong 12 years later with hundreds of thousands of readers, has an impressive resume that includes two previous books, (Ruminations on College Life and Ruminations on Twentysomething Life) a comedy CD (Just Go Talk to Her) and television appearances.

The comedian caught up with LAist to discuss his female fans, Facebook and of course, all that fun he's having.

Do you think women respond to your material because you're letting them in on what guys are really like?
Yeah. Or maybe it's my movie star good looks.

I'm very honest. I do it in a self-deprecating manor. I don't consider myself a misogynist. I don't think any of my fans would consider me a misogynist. I just so happen to tell it like it is. The fact is a lot of guys are dicks and we have one-track minds. That doesn't mean that there aren't ways to deal with that. 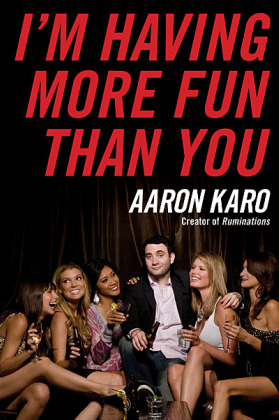 2) The book is about you remaining single while your friends and the people around you are getting married. As a result of all of your friends getting hitched, do you feel the need to make new single friends?
Guys don't really make new friends after about 25. It's just weird and the application process is very extensive. I moved from New York to LA, so in that respect I made some more friends out here. But now those friends are getting married too. Eventually it will just dwindle down and dwindle down and it will just be me sitting by myself at the bar.

Does that worry you at all?
Like I said in the book I do want to get married some day. So it's not an anti-marriage treatise. A few years from now, hopefully it will be me. As for now, I'm more than content.

3) And when that day comes, do you think your act and writing will change?
I should hope so. I don't know why everybody always asks me that. When I was in college, I wrote about being college. When I wasn't in college I wrote about life after college. If I ever get married, I'll write about being married. People still ask me, 'Do you still write about college?' My response to that is 'Do you realize I'm 30?' Five years ago I didn't know anyone who was married, now I'm writing a fucking book about it.

4) Was it difficult to walk away from a job on Wall Street to go into comedy?
No. I tell people it was an educated risk because I had already written my first book. I left Wall Street when my first book was about to come out so I didn't take a blind leap. I didn't know the book was going to be as successful as it was though.

Would I ever go back to working a cubicle? Absolutely not. Mostly because I don't like shitting in office bathrooms.

5) In the introduction of the book, you admit that you have spent your "entire adult life talking with, partying with and trying to sleep with" your fans. Many of the comedians I've interviewed have said that most comedy groupies are nerdy guys.Why is it different for you?
My comedy groupies are hot chicks. I don't know who those comics are. My stand-up shows are 65-70% women. They know that I love white wifebeaters, that's the like the signal of the Karo fans - the ladies wearing the wifebeaters. That's how they indicate themselves.

6) How has social networking helped your game?
Someone asked me the other day, 'Where do guys your age meet girls?' I said 'Two places: Bars and Facebook.' Where else am I going to go? The fucking library?

Something I mentioned in my stand-up was I always wished that girls had CitySearch reviews. You meet a girl, you can look her up on CitySearch and check out her reviews. And fucking shit, that's what Facebook is. It actually came true. You can go on and see what she does, see where she's from, check out her relationship status. It's just more information in my arsenal.

7) What are some of your favorite bars in LA for meeting the ladies?
The bars here are few and far between. That's one of my complaints in my book. I like Winston's. I like The Belmont, Coco de Ville, Crown Bar, El Guapo Cantina is pretty good. Of course, the amount of bars I've been to in LA in 2009 is probably equal to the number of bars I can go to in one night in New York.

Aaron Karo's book, I'm Having More Fun Than You is available now. Additionally, this fall Karo will embark on a comedy tour headlining clubs across the country including The Improv in Hollywood November 6-7. Tickets are on sale now.