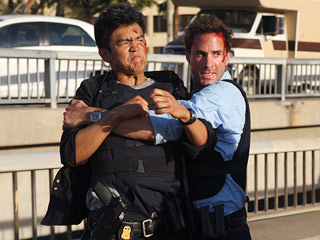 John Cho and Joseph Fiennes star in "FlashForward" which premieres at 8pm in ABC
Featured Series Premiere for Tonight:

FlashForward (8pm on ABC): ABC knows "Lost" will be going away so it's trying to line up a similarly addictive (and weird) replacement and they've settled on "FlashForward" for the moment - hell, it even has Dominic Monaghan from "Lost". For 2 minutes and 17 seconds, everyone in the world passes out/goes into a trance and experiences their life 6 months in the future. Why did this happen? Is that really the future? Etc.
—-
It's Thursday which means comedy domination by NBC. If you are a fan of "The Office" be sure to check out our Emmys red carpet interview with series writer, producer, and performer, B.J. Novak who appears at 2:17 in the video (whoa!!! Just like in "FlashForward", that's frickin' creepy!!).
—-
Last night's ABC comedy premieres did very well in terms of viewership. We liked "Modern Family" but aren't sure it has multi-season legs (but industry colleagues have told us to sit tight, the series gets better with upcoming episodes) and even though we had a shout out of support here for Courtney Cox's "Cougar Town", we thought it was pretty awful and saw a lot of similar sentiments on Twitter.

8:00pm Survivor: Samoa CBS - A twist gives a contestant a chance to make friends with the opposing tribe.

9:00pm The Office NBC - Pam works on the guest list for the wedding; Toby and Dwight go under cover to investigate a workers' comp claim.

10:00pm It's Always Sunny in Philadelphia FX - The gang tries to expand its horizons by going on a road trip to the Grand Canyon.