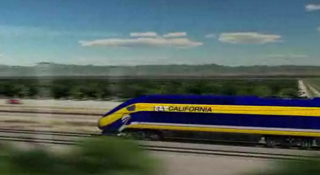 With the feds yearning to give away $8 billion in Recovery Act money to states for high-speed train development, California officials today prepared to submit an application asking for more than half of that.

"California is a leading contender for this federal funding because our true high-speed rail system is further along than any other project in the country," said California High-Speed Rail Authority Chairman Curt Pringle. "Plus, we can double the value of the federal government’s dollars by matching them with state bond funds approved by California voters last year, we can break ground before the federal government's deadline, and we can show that our early projects can stand alone as important improvements in their own right."

The Authority unanimously approved a grant application asking for $4.5 billion, which includes $2 billion for stations and work on the Anaheim to Los Angeles section.

"Our application is very competitive--the only true high-speed system in the country capable of travel up to 220-miles an hour," said Cathleen Galgiani, who represents a Central Valley district and was the author of Prop 1a, last year's bond measure. "It will bring badly needed jobs and economic activity to the state immediately."

California's high speed rail project would link the Los Angeles and San Francisco metros within a few hours ride. Governor Arnold Schwarzenegger is expected to formally submit the application by next week's deadline.