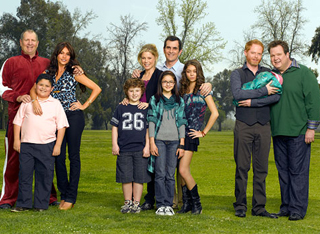 Modern Family (9pm on ABC): Of all the shows premiering tonight, this one seems to have legs. Yes, comedy kingpin Ed O'Neil provides an experienced cornerstone for the series but we're happy to see Julie Bowen, whom we know from "Weeds" and "Lost", given a venue we think she deserves. The promos are hilarious and the folks whom we know received screeners say the show can back them up.

Cougar Town (9:30pm on ABC): Call us a sentimental fan, but we want to see how series star Courtney Cox is doing. We don't have high hopes for the show, however, and are resigned to the idea that it will pass on much like Cox's FX foray, "Dirt", but at least it plays to her strengths as a comedic actress.
—-
If you are a fan of "Dancing With The Stars" or of pro snowboarder Louie Vito, be sure to check out our interview with him at the "Family Guy" pre-Emmy party last Friday night. Vito incorporated a flip in his routine during the season premiere - we wonder what he'll do to top that. Vito is at the end of the 2nd video on this post.
—-
Monday's edition of "The Late Show With David Letterman" had it's highest viewership in over four years, perhaps because President Barack Obama was the featured guest. Can't wait to see the numbers for last night's show which had former President Bill Clinton as guest.

8:00pm America's Next Top Model The CW - The contestants meet with Miss J. to prepare for their first runway show

8:00pm So You Think You Can Dance FOX - Auditions continue.

9:00pm Man vs. Wild Discovery - The crew discusses how they produce "Man vs. Wild" and what it feels like to follow in Bear's footsteps.