ESPN Throws LA Under the Bus 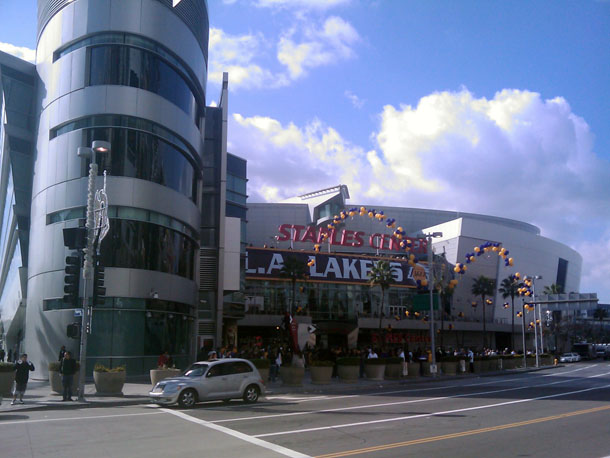 Staples Center in the LA Live Complex prior to a Lakers Game. LAist/Jimmy Bramlett

Sometimes I wish I had a job at ESPN. This wish stems from the hope of saving something I love. I grew up with ESPN. I watched it evolve from amateur hour. Remember Charlie Steiner being a Sportscenter host long before calling games for the Yankees and Dodgers? Remember how he’d spontaneously burst into uncontrollable laughter sometimes like Adam Sandler did during SNL skits with Chris Farley?

I watched ESPN birth Dan Patrick, Keith Olbermann and Craig Kilborn. I watched them give us incredible 360-degree coverage of the sporting universe. They gave us the lumberjack competitions and late night beach volleyball. I remember being a young kid in New Jersey sneaking into the living room to catch surfing competitions. They taught me how to integrate pop culture and sports. It was pretty cool.

Now I fear the worst. I fear ESPN has officially become TMZ. They’ve become the old guys quoting Entourage at the gym.

I understand cross-promotion. I’ll deal with a 30 second bump of Matthew-freaking-McConaughey promoting “The Ghosts of Girlfriends Past” by presenting us “The Ghosts of Playoffs Past”. I shouldn’t tolerate that, but I do.

I tolerate all of this and expect only one thing in return. That’s a fair shake for my city as a fan. I thought it was coming when they started filming the late night Sportscenter from their new studio at LA Live. I thought wrong, caballero.

We suffer Bill Simmons and his rabid Boston homerism because he is a great writer and a fun read. Still, no one seems to call him out that half of his articles are about him driving around Los Angeles. Why not live back East, Bill?

It’s a feeling that L.A. is a lot of fun, but not legit. On the East Coast Sportscenter, we have expert analysis and top tier writing. It’s Sportscenter at it’s best. What kind of quips do we get from Sportscenter: Los Angeles? “That run was longer than the line at Coffee Bean on La Brea”. Really? Is that what we are out here? Sushi-eating, frappuccino-swilling, spray-tanning airheads? Some of us are, to be sure. But there are sushi-eating, frappuccino-swilling, spray-tanning airheads in Boston as well.

It’s almost as if they think the East Coast is better in every way. It’s almost like there’s an “East Coast Bias”. Oh wait.

During my morning rounds, I came across my master thesis for the East Coast Bias: David Schoenfield’s article “The Decade Debate: Boston vs. L.A.” Before I read it, I knew ESPN was launching their ESPN Boston website. They’ve been plugging it hard on the air. When I saw this article, I knew L.A. was going to lose. Good thing I am a masochist and passing the savings onto you, Los Angeles.

The article sets up a battle between the 1980s in Los Angeles and the 2000s in Boston for the title of “Greatest Sports Decade Ever.” This by a man who wrote an article about the East Coast Bias existing. Seriously. Congrats, David. You are now a part of the machine.

Schoenfield’s first statistical wizardry manifested when he pointed out that while Los Angeles won more titles in the 1980s than Boston won in the 2000s, Los Angeles had more chances, therefore the edge goes to Boston. Even more flawed in logic was his expansion of “winning” to include overall records. Um?

Quick. Who finished 3rd in the 1986 American League East standings? Who won the 1986 World Series? What am I getting at? People remember the champions, not the regular season records. I mean, if you want to talk regular seasons, let’s talk about the Greg Oden draft and the Celtics virtually intentional tanking of their season for a better lotto pick. The point is championships are the currency of champions.

So as not to write a novel, here are some of the other deductions I took from the Schoenfield’s article in bullet list form:

While I totally agree Boston had the biggest comeback ever against the Yankees in that fateful ALCS, this entire article is bogus for a lot of reasons beyond the fact that Schoenfield isn’t sure if he’s writing a joke piece or a serious debate. Either way, it’s at Los Angeles’ expense.

Me? I’m not ready to call the 2000s for Boston quite yet. The Lakers have won four titles this decade. The USC Trojans have won two national championships. The Angels won a World Series. It’s great that between the Celtics, Patriots and Red Sox, Boston has tallied six championships this decade. If you count college football, which people in Los Angeles do and people in Boston don’t, we’ve won seven titles.

We disagree, Mr. Schoenfield. I think championships are what matters. As we used to say in Little League… Scoreboard.