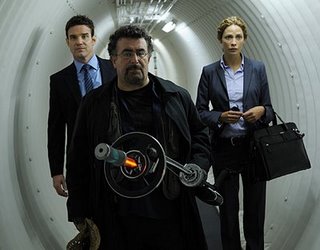 The season finale of "Warehouse 13" is at 9pm on The CW
More premieres tonight, included the much ballyhooed "The Good Wife" on CBS at 10pm whose writers simply need to change the names in news articles about South Carolina. Another premiere that caught our eye is "NCIS: Los Angeles" at 9pm, just like "NCIS" but more Los Angeles-y? Hey networks, send us some screeners otherwise we're forced to ridicule the premise of your show. What we'll watch instead is the season finale of Sy Fy's "Warehouse 13", a great little show that a friend of ours calls "the 'X-Files' meets 'Moonlighting'".
—-
It's Tuesday so that means another installment of "90210". If you are a fan or know a fan, please check out last Friday's video interview with series star AnnaLynne McCord aka Naomi Clark.
—-
In similar CW/FOX-of-yore news, Heather Locklear will be re-joining "Melrose Place" as the delightfully evil Amanda Woodward and will make her debut appearance on the November 17th episode. What're they saying, these new kids aren't good enough?

9:00pm Melrose Place The CW - After a fight with Jonah, Riley turns to Auggie for comfort; Caleb is furious with Ella when her director bails on a job

10:00pm The Colony Discovery - Mike recovers from a nasty crash