The TV Junkie is not a fashion guy. He looks to North Face's wicking microfibers because in this heat he sweats. He is a sweaty guy wearing frumpy, if not comfortable clothes, so he was somewhat out of his element at the Mondrian Hotel yesterday, where their Skybar was hosting "Emmy Suites", a collection of designers and cosmetics services targeting Emmy-party-bound performers and celebs.

Companies included Alexander McQueen, Joe's Jeans, Smash Box Cosmetics, Hobo Handbags, and Fenix Skincare. Most notably Beverly Hills Oral Spa Dentistry was performing teeth whitening on site (which seems kind of weird to us) and Moods of Norway, who really were Norwegian, was making waffles (which was also weird, but we didn't turn down the very tasty waffle they offered us). Whatever they had there, the glitterati seemed happy about it and it made some of them amenable to talking with LAist's TV Junkie.

The CW's "90210" is a phenomenon that can't be denied despite the old timers who cry "sacrilege" at the airing of every episode of the relaunched series. The undeniable powerhouse of "90210" is AnnaLynne McCord who was there with her equally beautiful sisters (what an enviable gene pool). The sisters talked up who they are going to be wearing at the Emmys (Alice + Olivia) as well as their plans for a book on fashion tips, their Emmy favorites (watch out Steve Carrell - someone has a crush on you) and their upcoming plans. AnnaLynne also gave us some insight on how The CW's "90210" is coming along as well as the regret in leaving FX's "Nip/Tuck" with a (remote?) possibility of a Nip/Tuck spinoff called "Eden".

We were particularly thrilled to talk to Carrie Preston who plays "Arlene Fowler" on the hottest show on TV, "True Blood". Preston let us in on the fact that the "black eyes" that the characters assume after falling under the spell of Michelle Forbes' "Maryann Forrester", are actually huge black contact lenses that all the actors had to wear. On Sunday, where she will be wearing Mako Takada, she is hopeful that her husband Michael Emerson, "Lost"'s "Benjamin Linus", will be honored with an Emmy after his third nomination for the role. We are hopeful as well.

The Skybar Emmy Suites was a fun experience and we hope they do it again next year - a great combination of fashion and TV. 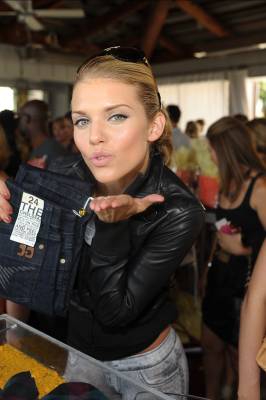 AnnaLynne McCord was at the Skybar Emmy Suites at the Mondrian Hotel on Sunset.