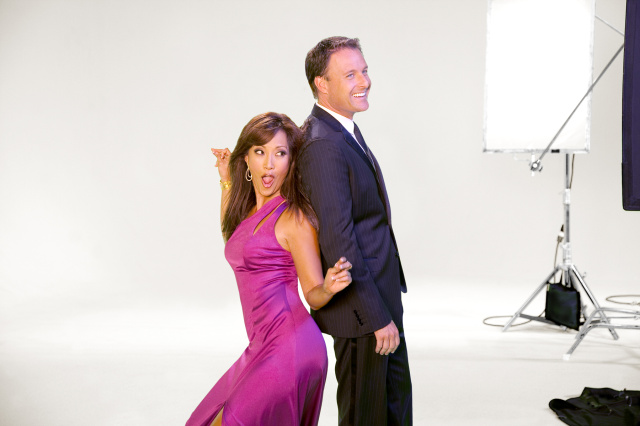 On Sunday, "Dancing with the Stars'" Carrie Ann Inaba and "The Bachelor's" Chris Harrison will be working the Red Carpet for TV Guide Network's coverage of the Primetime Emmy Awards. Earlier this week, LAist had the pleasure of sitting down and talking with the tandem who will be interviewing the biggest stars of the small screen on “Live at the Emmy Awards with Carrie Ann and Chris” from 6:00-8:00 p.m. ET/PT.

How did this opportunity come along for you?
Chris Harrison: It was very different for both of us. I already had an existing relationship with TV Guide, we'd been talking for years about doing something but with "The Bachelor" it just never worked out. Finally we worked a daily entertainment news show called Hollywood 411.

TV Guide Red Carpet is one of those, to me, iconic positions, it's almost like hosting the Miss America pageant. One of those things you want to check off your list as a host. You really want that job. So when I had the opportunity, when I was fortunate enough to be asked, I absolutely jumped at the chance.

Luckily was able to be paired with a good friend of mine in Carrie Ann. We've known each other obviously from the ABC family. We had the chance to host the American Music Awards red carpet together. So to not only have this job but then to be hanging out with a friend, for me it really is a dream come true. It's one of the best hosting gigs in television. It's awesome.

Carrie Ann Inaba: I kind of go where life takes me. I started out as a dancer, obviously, and turned into a choreographer which lead me to being a judge on "Dancing with the Stars." 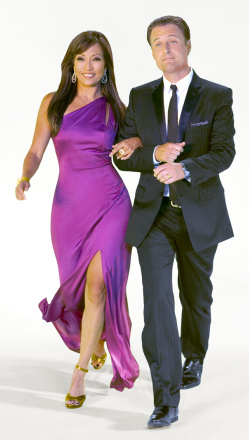 TV Guide Network’s new Red Carpet hosts Carrie Ann Inaba and Chris Harrison.
We had the opportunity last year to host the AMA Red Carpet and it was so much fun. I love live television! I grew up in it. It's always the most exciting two hours of your life. You never know what's going to happen. You're totally anxious right before it starts. It's always magic. To me, that's what television is all about. Doing the Red Carpet, especially with someone with Chris who's just such a pro and we have such great respect for each other and we're so fond of each other that I think it's going to be so much fun.

We're going to try to bring something a little different to the TV Guide Red Carpet, we have our own style of doing it. I think it's going to be exciting. It's one of those things that I just go where life takes me, and it brought me to this stop and it looked really interesting and I'm going to go for it.

How important is the chemistry that you guys have?
Chris: I think it's extremely important and something you don't find on the red carpet, right now is a good team. We very much are a team. We both love TV, we both love the business and we both have the same approach that it's not about us. There's too many hosts who just scream, 'Look at me, look at me!' It's not about me and Jennifer Aniston or her (Carrie Ann) and John Hamm. It's about Jennifer Aniston and Jon Hamm and what we can get out of them.

I think both Chris and I are very relatable. We're kind of just normal everyday people. I know for a fact that I'm just as excited to see all those people on the red carpet as the people at home. Hopefully they can come on the journey with us and experience it through us.

Chris: When we wrap it up on Sunday night, I hope people will feel like they just hung out with a couple friends on the red carpet. That's the vibe that we want to have.

Who are you excited to talk to?
Carrie Ann: I have many people. I really want to talk to Jim Parsons. I have this strange crush that I'm developing everyday that we talk about him more and more in our meetings. I really would love to talk to Glenn Close and Toni Collette. I love "United States of Tara," I think it's a fascinating show. I think Glenn Close in "Damages" is amazing.

I'm curious about people like Rainn Wilson and Tina Fey, just to see how funny they are in person.

Chris: As just a guy, I'd say obviously Heidi Klum, Jennifer Aniston, those are the easy ones.

Carrie Ann: Such a guy!

Chris: I know, I just had to throw out that, just as a guy, answer. Really, the people who I love are guys like Ricky Gervais, Stephen Colbert and as she (Carrie Ann) mentioned Rainn Wilson. I love people who are just so unbelievably quick witted and out there. As a host, it really challenges you and you just really got to stay out of the way and hang on for the ride because they're phenomenal. I like people like Kevin Nealon, these great comedic minds.

I'm such a fan. I'm a ridiculous fan of "Entourage" and "24." I'm a big TV fan so I really do enjoy seeing these people.

Carrie Ann: And there's great TV out right now. Reviewing all of the tapes and doing all of our homework, I was really blown away. Comedy, drama, mini-series and movies and also dance on TV is huge right now. It's a great time for dance right now. 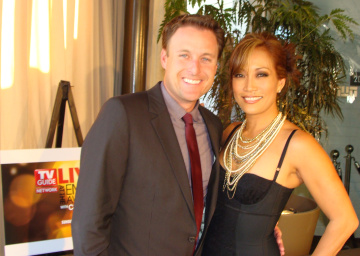 TV Guide Network Emmy Red Carpet hosts Carrie Ann Inaba and Chris Harrison. | Photo by Tim Hammer/LAist
Are you rooting for anyone?
Carrie Ann: 'Damages!' 'United States of Tara!'
Chris: What about 'Dancing with the Stars?'
Carrie Ann: Oh yes.
Chris: What about Tom Bergeron and Dancing with the Stars?
Carrie Ann: Yes, Tom Bergeron and Dancing with the Stars. See I'm such a fan of TV. This isn't about me. This is about them.
Chris: In the reality category, I'm glad my buddy Jeff Probst won last year. I think this year it will be between Ryan (Seacrest) and Tom Bergeron. Ryan deserves one and he will get one but I kind of hope Bergeron gets it this year to encapsulate his career. He deserves it. I know it's not supposed to be an overall career thing, but it really is. And I know it's not going to win, but I'm a huge Entourage fan. They always get snubbed in the end, but I'm a huge fan.

I see that both of you are on Twitter
Chris: I got Carrie Ann on Twitter. What do you call it when you get someone start someone on Twitter? Is there a word for that?

Greg Grunberg from "Heroes" got me into it, right when it started. I remember thinking 'This is the dumbest thing. This is never going to catch on.' I was so anti-Facebook and all of that stuff.

Chris: And now I have a Twitter page and a Facebook page. I love it. What I love about it, no offense to publicists and the magazines, and this is what I love about the blogs too, it's actually our words. You're actually hearing from Carrie Ann Inaba. Where else are you really going to hear from her unfiltered, unedited words? Sometimes it's to the detriment of celebrities, but overall I think it's a good thing.

Chris, I noticed on your Twitter that you commented on Kanye West's actions at the MTV VMA's?
Chris: I said he is a ginormous ass. I don't think I said 'ginormous' because I didn't have enough characters but that's what I wanted to say. He was a complete ass.
Carrie Ann: I agree.

That's the unpredictability of live TV, something Carrie Ann just mentioned.
Chris: Like what Carrie Ann said about live TV, I think it comes from her dance background and my sports background. It's the closest thing to performing.
Carrie Ann: You've got to know what's going on. You've got to have the energy, you've got to be ready.
Chris: You've prepared for it but really there's no way of knowing what's going to happen. There's no way to what Rainn Wilson or Ricky Gervais are going to throw at you. There's no way to know when a Kanye West moment is going to happen. So doing your homework and being prepared gets you ready for those moments, but really your mind just takes over and that's when you really enjoy being host. When it's over, good or bad, it's over. That's what I love about live TV.
Carrie Ann: That's what I love about live TV. One shot and you're out of there.