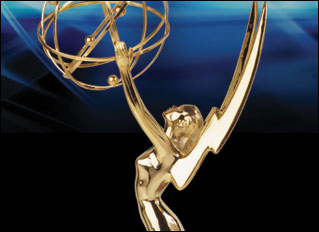 This week/weekend it's all about the Emmys and Sunday night at 8pm is where it's at. This puts the broadcast in conflict with a new episode of the Emmy-nominated "Mad Men" as well as the premieres of HBO's "Curb Your Enthusiasm" and "Bored to Death" - thank goodness for repeat broadcasts and HBO-On-Demand. LAist's TV Junkie will be at the show, on the red carpet and in the press room so stay tuned to LAist for up-to-the minute posts on Sunday. The TV Junkie will post his Emmy picks tomorrow and you can compare them against your own. Both The Hollywood Reporter and Variety have devoted a ton of digital ink to the Emmys, so check them out if you want even more.
—-
Did anyone catch NBC's "Community" last night? Was it a good thing or should Joel McHale focus on his day job at "The Soup"?
—-
Milestone: CBS' "The Guiding Light" marked its final episode after being on the air (both radio and TV) for 72 years. Countless actors, writers, producers, and technical staff learned their chops on that show thus creating a legacy that extends beyond the daytime TV/soap opera genre.

9:00pm Monk USA - Natalie believes a critic who panned her daughter's performance is responsible for a murder

10:00pm The Dish Style - More tips and news for stylistas

9:00pm Curb Your Enthusiasm HBO - Season Premiere. Larry attempts a pre-emptive breakup with ailing Loretta; Larry and Jeff learn not to make an empty gesture to a Funkhouser.

9:30pm Bored to Death HBO - Series Premiere. After his girlfriend moves out, writer Jonathan Ames places an ad offering his services as an unlicensed private detective.