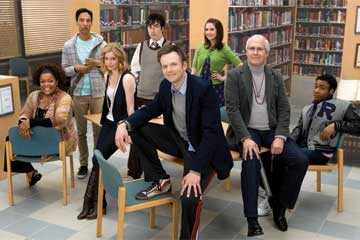 "Community" starring "The Soup"'s Joel McHale premieres at 9:30pm on NBC
Check out this great time lapse video of the set up of the LA Convention Center for the Creative Arts Ball and Governor's Ball. Makes us want to take out our Tonka toys. The Governor's Ball happens right after this Sunday's Emmy Awards and every news outlet sends a video crew to see who show up and what they're wearing, etc. We're envious as this year's wine sponsor is Beaulieu Vineyard - a favorite of ours. [Hmm, how can we score a ticket for next year's ball?]
—-
LAist has had some great stories on the Dodgers over the past few days so now we will contribute one with a TV angle: Tomorrow Wilmer Valderrama will throw the ceremonial first pitch at Dodger Stadium just after his character, Manny Garcia from his show "Handy Manny" poses for photos with Dodgers left fielder Manny Ramirez. Talk about endangering the space-time continuum with this matter/anti-matter meetup. If your kids are "Handy Manny" fans get ready for a primetime special on October 4th where Manny hits the road.
—-
The Fall Premieres onslaught truly begins tonight with about a dozen premieres. While we desperately want to see FOX's "Fringe" premiere we will have to defer to Thursday night comedy on NBC which is bringing back many old favorites as well as launching "Community" and as we are huge "Soup" fans, we can't miss Joel McHale's primetime lead debut. Then we'll head over to FX for some raunch with "It's Always Sunny In Philadelphia" and then it's on to late night where Megan Fox's Conan appearance is nicely bookended between Bill Clinton on "The Daily Show" and Megadeath on Fallon. Enjoy!

[Please check out full listings after the jump]

9:00pm Pig Bomb Discovery - Great name! Wild pigs are reproducing at an alarming rate in the U.S. and are becoming bigger and more aggressive.