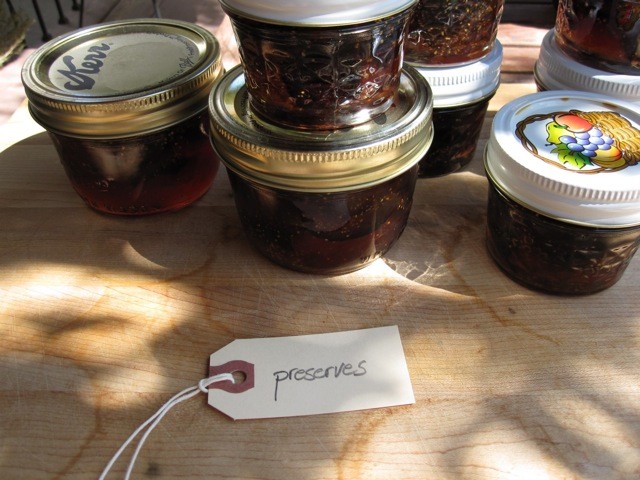 By Willy Blackmore/Special to LAist

Looking for Mason jars at Target a few weeks ago in preparation for batches of preserved lemons, homemade yogurt, jam and pickled beets, a number of employees responded with blank looks when I asked where to find canning jars. This temporarily led me to believe that canning was a foreign concept in farmers’ market and Whole Foods-laden Los Angeles, work best done by Midwestern grandmothers still influenced by Depression-era frugality. But Angelino Kevin West’s blog Saving the Season makes it very clear that canning is still a relevant and if not strictly necessary than undoubtedly delicious means of preparing food.

Cataloging what he calls his “irrational enthusiasm” for jamming, pickling, preserving and other means of putting up fruits and vegetables (and maybe fish too, sometime soon), Saving the Season is not only packed with information and recipes, but interesting literary allusions, personal advice from Alice Waters and beautiful images. Kevin’s frequent and very well-written posts (he is the West Coast editor for W Magazine, after all) are a joy to read even if you don’t have plans to stuff fifteen pounds of produce into Mason jars and seal them shut in a bath of boiling water for safekeeping.

Kevin responded to our questions about blogging, canning and eating via email, meaning we unfortunately didn’t get the chance to taste of any of his wares. But after reading his answers, we’re ready to take his advice and grab some end-of-season tomatoes and peaches from the farmers’ market and give some of his recipes a try. 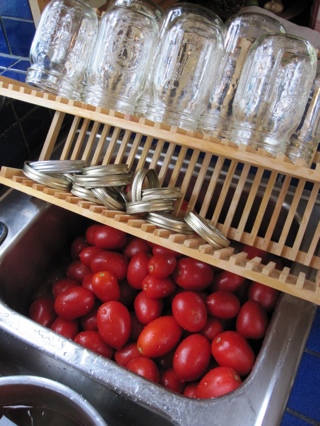 LAist: When did you start blogging? What lead you to writing a blog about canning?

The spark that gave life to my Frankenstein monster—because that's how it feels sometimes—came from poet and New Yorker staff writer Dana Goodyear. I had started canning in the spring of 2008, which was good and bad for my friends. On the down side, they had to endure endless chatter about my kitchen work, but on the other hand they also got jars of this and that for birthday presents and thank-you gifts. I think it was kind of a novelty for them—jam made by a W Magazine editor—and their appreciation became an excuse for my ever more manic canning activities. Dana in particular sensed that I was in the grips of an irrational enthusiasm, and since blogging is the medium best suited to documenting obsessive pursuits, she suggested I start a blog. She joked that I should call it Put Up or Shut Up. The name SAVING THE SEASON came from a conversation with chef, cookbook author and LAT magazine editor Lora Zarubin. My first post was 15 June of this year.

It seems from reading your blog that canning and food in general has been a long time interest/obsession of yours. Have you always been canning? If not, what brought you back it?

I cook because I love to eat with friends and because it reminds me of where I come from. My family on both sides are from rural Blount County in Eastern Tennessee. They all put up produce from their own gardens, and as a result I ate a lot of pickled beets and canned Kentucky Wonder beans and strawberry freezer-jam when I was little. I guess because of Gran's influence—she's my West grandmother—I've always been interested in the alchemy of the stove, and I started cooking dinners at home when I was about 15. After college spent time in Berkeley hanging around Chez Panisse and later I learned a lot about cooking and eating when I lived in Paris as W's European editor from 2000-2004. By I'm now pretty confident in the kitchen, but it wasn't until April 2008 that it even occurred to me to preserve anything. One Saturday I impulsively bought an entire flat of strawberries at the Santa Monica Farmers Market and realized there was no way to eat them all. I wondered why I'd never made jam, and what I've been doing ever since is trying to figure out how to make preserves that taste exactly how I think they should. My Blenheim apricot butter and black mission figs with wild aromatics come close.

Canning/jamming/pickling are methods that seem to be on the rise in the culinary world, following the growing interest in cured meats that has developed over the past few years. What do you think has lead to such decidedly old school approaches to preservation becoming popular again?

Three C's: connoisseurship, curiosity and commitment. Everyone seems to know everything about food these days—that's the connoisseurship—and the revival of traditional preserving techniques is a result of cooks wanting to explore every aspect of the kitchen repertory. That deeply American strain of curiosity had already led professional chefs, home cooks and producers to ask themselves how do you get the best bread, wine, pasta, pizza, beer, cheese, olive oil, cured meats, whatever. The answer, always, is to make you own. It's inevitable that we'd arrive at canning. The commitment I mention is to local, seasonal and organic food. Maybe you'd call it the Michael Pollan effect. More and more home cooks want to make use of local food resources in order to take control of their diet back from industrial agriculture. Canning is a expression of that same slow-food worldview: a tomato that is local, seasonal and organic in August has the same virtues when you can it at home and use it in January. Home-canned goods are, first and foremost, home cooking. About a year ago, I read an interview with Alice Waters in which she said that we need to reconsider canning. And so we are.

I also think that nostalgia plays a role. This impression comes from the many conversations I've had and from the emails I've received from readers. Over and over I've heard people say that they used to make jam with their grandmothers or mothers, and now they want to learn how to do it themselves. Food is a powerful connection to the past—to memory, to family, to culture, to self. Preserving food by traditional methods allows us to reconnect with what we value about our own heritage, as individuals and as a culture.

Finally, the zeitgeist as defined by the current recession no doubt also plays a role. I was in San Francisco recently and had lunch with a major brand consultant who also happens to be a self-proclaimed foodie. "Big food is out," he said as we ate La Quercia proscuitto at the tiny, homey cafe Bar Jules. What he meant is that the whole Bush-era cult of the rich, imperious celebrity chef and the fancy restaurant meal is out of step with how we are now feeling as a nation. Home-made jam is "small food" at its best. 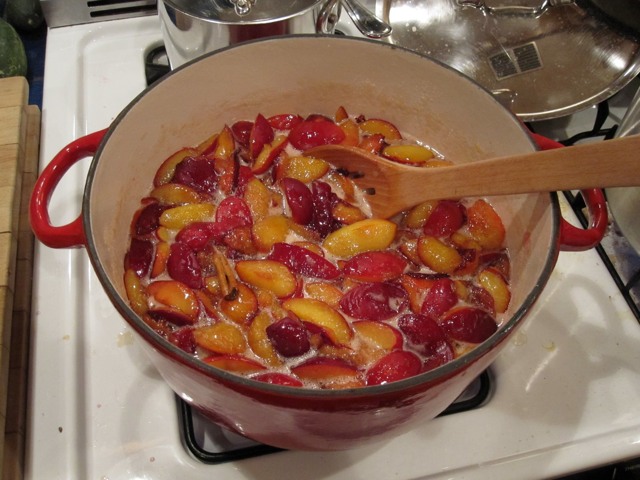 Where do you source the produce for your canning? Do you grow anything yourself?

Most all of the produce I use comes from local farmers markets, although I've also put up plums and wild blackberries from my Mom's place in South Carolina. (Both were served at her wedding last fall when she married a man she had reconnected with at their 40th highschool reunion.)

Whenever I'm on a road trip, I'll stop at farmstands and come back to Greenvalley with a car full of stuff to can. Unfortunately I didn't have time to plant a garden this year, but I do gather wild aromatics on hikes through the canyons around my house.

Beyond preserving the fresh flavors of the season for a later date, what can canning do for a fruit of vegetable that more immediate cooking processes can’t? Is there any fruit or vegetable that you prefer preserved as opposed to fresh?

Pickles show you what canning can do. A home-made fermented dill pickle is the cucumber's leap towards immortality. Plain old green beans preserved in a spicy, dill-infused vinegar—dilly beans—are a delicacy.

Likewise, sweet preserves transform—and arguably improve—fresh fruit in two ways. They allow you both to concentrate the fruit's flavor to its intense essence and also to supplement that flavor with aromatics, alcohol or other fruits. I personally think that jam made from Blenheim apricots scented with fresh lemon verbena leaves is unsurpassed by anything, even a fresh Blenheim apricot. Likewise, a sprig of rosemary in concord grape jelly or a chunk of ginger root in damson plum butter transforms the fruit into a preserve that's more delicious than the raw fruit alone.

With Labor Day past and fall upon us, the canning “season” is coming to a close. But with the farmers’ markets of Los Angeles open year round, are there any fall/winter fruits or vegetables that you’re looking forward to packing into Mason jars?

It's true that April through August are the busiest months for the canner. But in California at least, the canning season is nearly year-round. Summer produce is now on the wane, but the autumn fruits are coming in fast and furious. For the next month or more, I'll be busy with pears, apples, grapes, pumpkins and nuts. I'm particularly excited about quinces this year—I want to make quince paste (membrillo) to serve with cheese and to develop a recipe for the amazing quince syrup that Chez Panisse's David Tanis gave me to taste. Then the winter months will bring in the whole citrus cycle—oranges, grapefruit, lemons and the rest—and before you know it, spring will be here with a new crop of strawberries to preserve and asparagus to pickle.

Your blog is updated frequently and often with new recipes. Do you eat Greenvalley Canning products as frequently as you produce them?

Every day. Preserves are my fast food. Breakfast is usually yogurt and jam, and then if I cook dinner at home, dessert will be a sweet preserve or brandied fruit served with creme fraiche, whipped cream, ice cream or cake. I always have jars of pickles in the fridge to snack on and usually some kind of relish or salsa to dress up a quick meal of fried eggs or cold meats. Because I love canned fish, I'm looking to buy a whole local albacore tuna to put up. That will be my lunch for the coming year.

Also I'll admit that I'm a show-off. I share the Greenvalley cupboard every chance I get. I give away something almost every week and this year for the holidays everyone I know is getting jam and pickles. Whenever someone comes for dinner, I'll make a point of opening a new jar of something.

My all-time favorite Greenvalley moment was this summer when a friend and I went backpacking in Kings Canyon and we ate strawberry jam and homemade butter at 10,000 feet.

Is there a recipe from you blog that you would recommend for first-time canners?

Yes—everybody should immediately run out to the nearest farmers market to get five pounds of peaches and ten pounds of tomatoes. You can hardly screw up basic peach jam and if you're a little adventurous, you can customize the basic recipe according to whim. This year I've flavored peaches with prosecco (think bellinis from Harry's Bar in Venice), lavender and, believe it or not, Earl Grey tea. That brilliant suggestion came from a blog reader. I call it LORD GREY'S PEACH JAM.

And then everybody needs to have canned tomatoes in the cupboard at all times—for pasta and pizza, for soups, stews, braises and sauces—and they couldn't be easier to put up. I recently made both peach jam and canned tomatoes during a public demonstration at Surfas, and the recipes are on my blog. Now get busy.