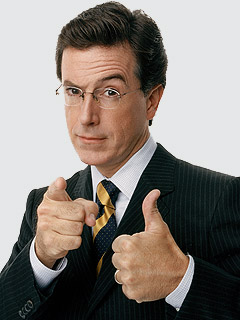 "The Colbert Report" will begin streaming the albums of musical guests starting tonight with The Flaming Lips
Comedy Central's "Daily Show" and "Colber(t) Repor(t)" are back from hiatus this week and have some great line-ups including former President Clinton on "Daily" and tonight, The Flaming Lips on "Colber(t)". Not only will the band appear on the show, but their album, "Embryonic", will also be streamed from the show's website as will the albums of future musical guests. Take that Oprah.
—-
Arianna the sitcom creator? Yup, politico blogger queen is helping to produce a show for ABC that features the trials and tribulations of three freshmen members of Congress. And we were hoping it would be a show about a woman who finds out her conservative Republican husband is gay.
—-
Another week, another bonehead network move: this week the non-"Tonight Show" launched on NBC, thus killing 5 hours of programming and lookit, CBS is putting Jenna Elfman back on the air. What have we done to deserve this? And lookit, something has impregnated her (again) in real life so now she's playing a pregnant character. Iran will have nukes and now this... Lord Xenu help us.

8:00pm Wipeout ABC - A firefighter and a prison guard are among the contestants who face the Blades of Fury, the Gears of Doom, the Banana Split and the Onion Ring Hurdles

10:00pm Top Chef: Las Vegas Bravo - The contestants cook with cactus, sleep under the stars, and prepare a menu for Las Vegas cowboy